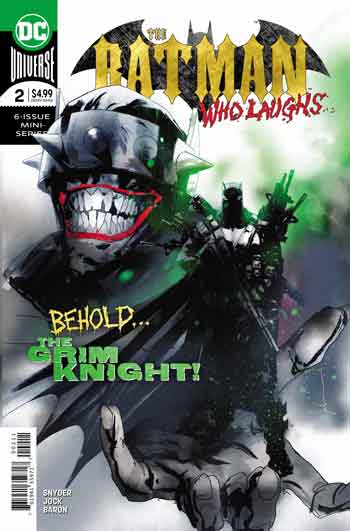 The first issue of this series threw me for a loop! I was genuinely shocked at some of the wild events that happened. This issue picks up right where that one left off. And let me just say, it doesn’t let up.

Snyder and Jock come back in with a lot of ideas and insane amount of energy. It’s just an incredible issue that they have created.

We start off in the Batcave. After the events of last issue, Bruce has been transformed into a Joker version of Batman. Alfred is performing some harrowing surgery on Bruce.

The art by Jock in this sequence makes your stomach turn a bit.

It’s well done and it illustrates just how terrifying this surgery is. Jock picks his camera angles well and keeps the reader off balance.

Bruce gets up and swears to Alfred that he’s going to do whatever it takes to stop the Joker. He stands up after that surgery and he literally looks like a Batman monster.

Batman is putting every anti-Joker serum that they have into his body. But he’s barely holding it together. He then looks over and sees that the Joker is there on a table. And the Joker just starts to laugh. It’s an involuntary reaction while he’s unconscious. It’s creepy as hell.

All of these things happen in the first few pages and it is wonderful. Snyder is one of the few writers who doesn’t compress their stories.

After that crazy opening, we cut over to Gotham City. A body is dropped from an impossible height. Commissioner Gordon and Harvey Bullock go to investigate. Something starts to happen to Bullock. That’s when the two of them discover an old map of Gotham. Things just kick into high gear after that.

Scene after scene, the book just thrills. The Batman Who Laughs attacks the police!  Batman shows up to stop him! They have an incredible fight scene! Then, Bruce spends the rest of the issue trying to determine the evil Batman’s plans. Can he stop the Batman Who Laughs? And just what the hell does he want?

Snyder writes an amazing script here. I loved his work before and this is him at the top of his game. He works so well with Jock that the results are stunning. I’m at the edge of my seat for this one. The story and the imagery are top notch and this may end up being a true classic.