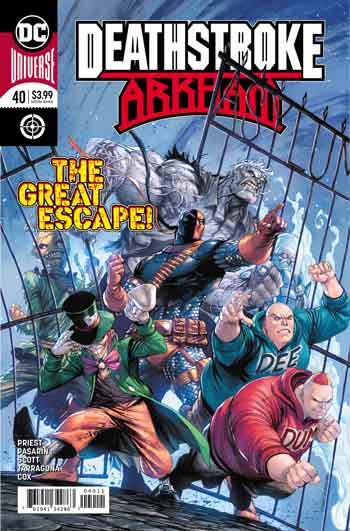 Or at least a break out of Arkham Asylum.

In the last few issues, Slade has been staying there and it’s led to some interesting hijinks!

Christopher Priest had changed gears a bit for this story and it’s been very different this time out. That being said, it’s been a well crafted comic as well.

This issue starts out with Two-Face on his spiritual journey in Northern Vietnam near Laos.

He’s with Rose and he’s having a bit of a hard time. He looks to his coin for a little guidance.

Priest has put a little of the focus in this issue on Harvey’s adventures, and we start to see the reason behind it here.

I knew he would get to it eventually but it was nice to see what the actual plan is.

From there, we head on back to Arkham Asylum to check in on Slade. And how is he?

Well, he’s slowly losing his mind apparently. He is unable to figure out what is fact and what is fiction. We get to see some scenes of Slade with his mind corroding. He can’t determine what is real in these scenes.  The art beautifully shows us that as well and it’s so nicely handled you start to wonder if he might be losing it too. And that is when the real craziness begins.

It’s time to escape Arkham. Slade puts on his costume and it’s time to evacuate the premises! That’s when the issue goes into high gear with action and suspense. The rest of the issue is Slade not only trying to escape the Asylum, but also the reality presented to him. The results are staggering.

The last page of the issue ends the storyline. And it’s so perfectly realized, that I commend the creative team incredibly. This is some good stuff. I don’t know where we will end up next, but it’s always an adventure. This is some great storytelling indeed going on here.