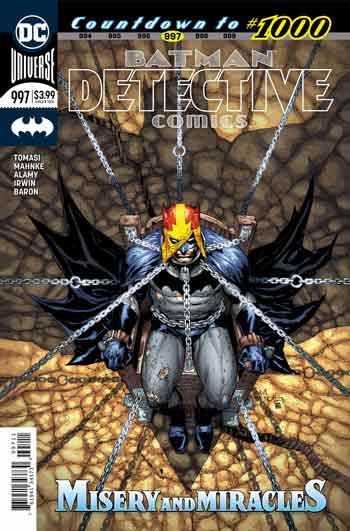 The countdown to the landmark Detective Comics #1000 is trucking right along. And I think it’s been pretty mesmerizing.

Peter J. Tomasi is the writer I would never have expected to do this kind of story. But he’s certainly bringing it home month after month. The writing has been spectacular with some truly awe inspiring artwork to match!

This issue starts off with Thaddeus Brown, the original Mister Miracle and Batman stuck in a shark tank. They are circled by hungry sharks ready to feast. This scene is super tense as the duo look for a way to escape! Things look increasingly hopeless until finally, they manage to get themselves loose!

The artwork in this scene is particularly amazing. Mahnke just draws it like a professional should. It’s so well paced and so incredibly drawn. I loved it. When they get loose, they face a new threat. It’s a demonic entity that is in the guise of the Batman.

Except that it’s a cracked out nightmarish version that has come forth!

A huge fight then ensues!  Visions of Bruce’s past come forth! It’s a horrifying and dizzying fight! Finally, Bruce gets free and decides that it’s time to go! He thinks he knows where he needs to head to from here. Thaddeus offers to come but Bruce tells him that he needs to go alone.

Bruce departs. This quest of his leads him to ninety miles outside of Gotham City and to a villain that we haven’t seen in quite a bit. That’s right, ladies and gentlemen. Hugo Strange is back! And that is where we leave off. What Strange has to do with it all is  anyone’s guess but I’m excited to find out what the deal is!

If there is one minor complaint, I would have to say it’s that the issue moves so quick. That’s because I was focused the entire time I think and I just wanted more. It’s a good place to be however. This is some great stuff, overall. I put this at the top of my reading pile whenever it comes in now. It’s been truly excellent.