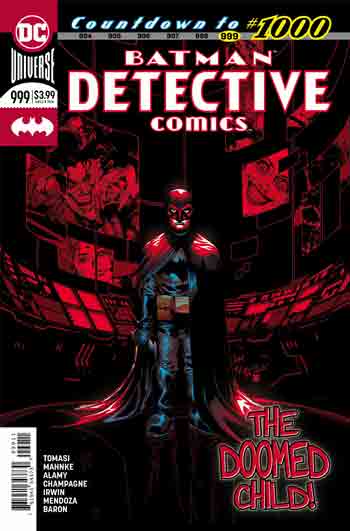 This book has become completely and utterly awesome! In just a few short months, Peter J. Tomasi and Doug Mahnke have made Detective Comics one of the best books on the market. And just in time for the big celebration next month.

This book however was mostly excellent and serves as a wonderful lead in to the big event next month of issue 1000!

The reveal at the end of the last issue was that Bruce was being put through his paces by a younger version of himself.

And we’re talking a young boy version of Bruce Wayne.

That’s where we find ourselves at the start of this issue.

The young Bruce is in a Batman costume and starts beating the hell out of the older Bruce.

He starts to scold the older Bruce too telling him that “we are the villain!” Just what is going on here?

It was absolutely crazy and wild as can be. Yet, it felt like mischievous fun. Then, the young Bruce starts leading his older self through a myriad of situations. It starts becoming increasingly emotional as they go from situation to situation. It’s almost like a dark tour through Bruce’s psychosis.

The most emotional scene of the entire issue is at a gravesite. It really hits you hard and Mahnke gives the scene a surprising depth I wasn’t expecting. Tomasi nails it home too with the dialogue. And then there is a twist ending. I’m not going to lie and say it was completely amazing as it really wasn’t. It felt like it came up short.

Part of that is because the “twist” took away most of the weight of the story and of the previous issues. It was a pretty obvious twist too and a quick way to get out of a corner Tomasi may have written himself into. It was a little sad to me as it could have been memorable and stunning. Instead, they just brought it back to status quo.

The good part is that the last few pages bring the issue up a bit. And it finishes nicely after that dull twist. So this is the ending of a great arc by Tomasi and Mahnke.  It could have been a classic  It’s still worth reading though, and it made me very excited for what is to come.