The trade paperback collecting issues one through five of HEY KIDS! COMICS! hits the shelves on February 13th.

For those of you who’ve been too distracted by outbursts of blind rage and hurt feelings by bothering to give a fuck what Bill Maher thinks, for the record, HEY KIDS! COMICS! is a fictional history—a roman a clef…or make that a bande dessinee a clef—of the comic book business, specifically of that period in our industry’s history we have come to call the Silver Age.

This also goes for all of you who waited for the trade. I can dig it—HEY KIDS! COMICS! covers the time from when comics were all in color for a dime and sold millions, to an era when they cost $3.50+ a pop and the audience is down to thousands…and shrinking daily.

If these five issues had a subtitle, the most appropriate might be TARNISHED SILVER…dealing as it does with the experiences, tragic and triumphant, fictionalized but all too true, of the men and women who truly invented our curious craft.

If all you care about is the subject matter that has virally conquered American mainstream comic books so completely as to choke out anything even vaguely different, HEY KIDS! COMICS! is not for you.

If, on the other hand, you have even the slightest curiosity as to what it was like to be there at the beginning…to get a glimpse at the fateful meeting of a crowd of journeymen and geniuses, criminals and clowns, none of whom had the slightest inkling that we’d still be talking about them and their work today, I can’t recommend it enough. 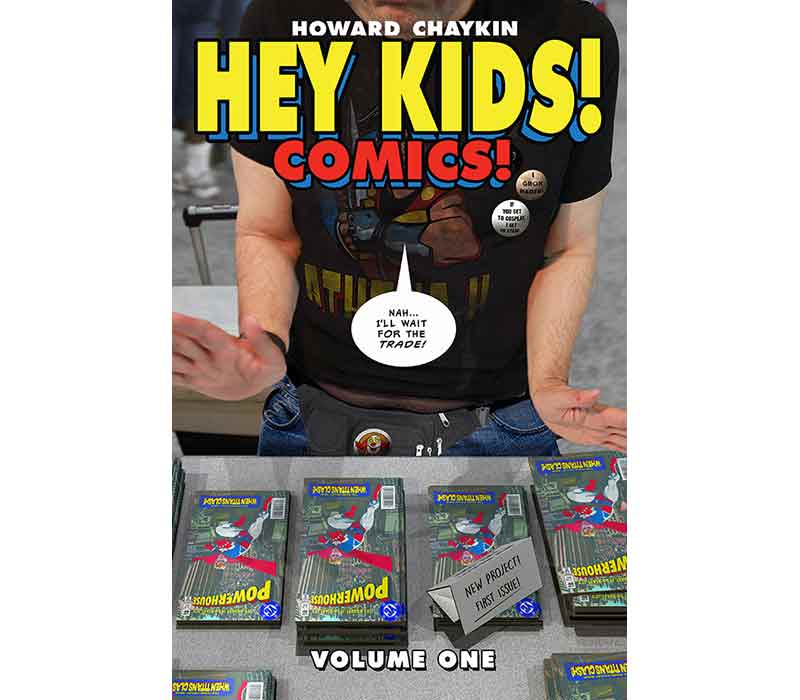 It would be utterly delightful if you bought the fuck out of this trade…so that there would be a volume two, and three.

And for those of you who’ve seen and potentially read the book, and are still consumed with the “Who’s that supposed to be?” game, consider—volumes two and three would deal with many of the cast from volume one, all of whom are based on or inspired by men and women who are dead—as well as a swarm of characters based on or inspired by a swarm of all too live and breathing men and women.

I love and am loved by many of this live and breathing crowd, I have an equal indifference with quite a few, and I share a mutual loathing with the rest.

Now, love me or hate me, who doesn’t want to see me try to manage that fucking sabre dance, am I right?

Howard Victor Chaykin—a prince, and despite it all, still in the game…today, at least.