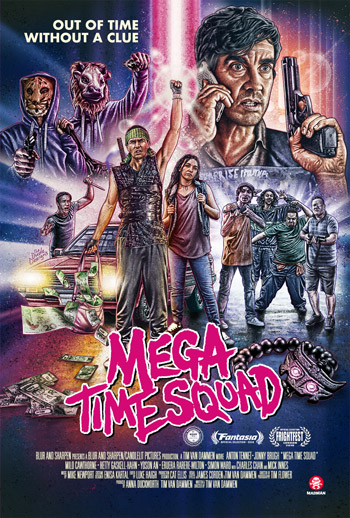 I remember seeing an advanced screening of Shaun of The Dead with a packed house years ago and being underwhelmed as the audience screamed with laughter and cheers. I’ve since grown to very much like the film (true love still evades Shaun and me, alas), but the tropes that bugged me at the time and, frankly, still do are the hyperkinetic quick-cut montages of Shaun getting ready for work, etc.

I felt these montages were too-obvious homages to Evil Dead II and Raimi in general. But the audience ate them up.

Perhaps I’d just seen Evil Dead II so many times that a parody/homage felt tired to me.

I felt the same reaction to several sequences in Mega Time Squad.

Writer/Director Tim Van Dammen is clearly a fan of Raimi and explicitly pays homage to the famous “Groovy” montage in a “ready for battle” sequence late in the film. It once again felt tired and flat to me.

I also yawned during the, I believe, four billionth Taxi Driver nod to “You talking to me?” early on.

It must be me, because Mega Time Squad has received many warm, glowing reviews, mostly from festival screenings.

I’ve written before about “Festival Movies”, that is, movies that play like gangbusters to a packed house at a film festival primed for a good time, while playing quite differently to someone watching the film alone at home on their laptop. With some films, the enjoyment gap can be colossal.

So it apparently is with Mega Time Squad, as I could barely get through the thing. It’s certainly competent, and the two leads have a bit of appeal. But it’s mostly a slog, even for this dyed-in-the-wool time travel fan.

For the record, the story concerns a lackey for a local crime “boss” in a small New Zealand town who dreams of making a score and leaving town. His big attempt to do so goes awry; luckily he’s wearing an ancient Chinese time travel bracelet…

Van Dammen makes some effort to give the lead an arc, and his love interest is no lilting flower. I never laughed out loud, but Van Dammen and cast give it a go, so once or twice I exhaled harshly through my nostrils to at least acknowledge their efforts.

Maybe peeps who have just discovered Raimi/Scorsese/Wright will get a kick out of Mega Time Squad,. Maybe it just wasn’t made for me. Maybe I’m being too hard on the film, or maybe I should’ve seen it at a festival.

Or Maybe…wait, is that Evil Dead II on the TV???! Wait til you see Bruce Campbell say, “Groovy”!!!

Mega Time Squad is playing in limited release and is available On Demand.