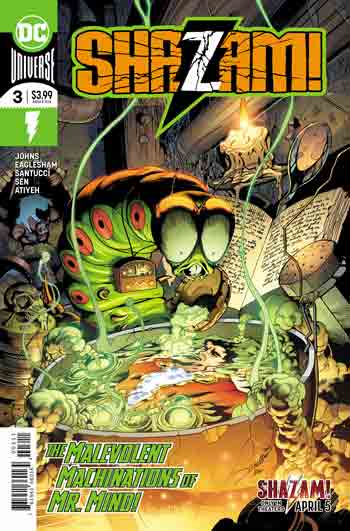 Mr. Mind is back!

That’s all you need to tell me about what’s in a Shazam! comic book and I’m in.

And the cover of the book confirmed it! What’s better than that? I was excited. For me, there’s nothing better than a big worm who can control people’s minds. Unfortunately, the cover is a bit misleading.

While Mr. Mind is definitely involved in the story that’s going on, we never see him! That was a major bummer.

Instead, we are treated to a story where Billy Batson and his family traverse the “Seven Magiclands!” It’s a bit much honestly from the start.

Billy and his family are involved in a sort of medieval land.

They meet the kid in charge named King Kid! He seems like a fun fellow!

There’s even a banquet happening! There’s all sorts of food there that kids love. And then King Kid tells us a story. There doesn’t seem to be much of a point to it. Then Billy asks a question. He also alludes to the fact that he doesn’t want to worry his parents. King Kid and his gang get all mad at them. Billy and the family “Shazam” it up. Then a battle ensues!

It’s a fun battle for the most part as we travel into the different lands. They are all very unique and well designed. The Shazam family and King Kid’s army are fighting all over the place. And it all works for the most part.

The thing that was nagging me though is that the plot felt pretty rushed and thin. I mean, I get the reasons why they are all fighting. It just didn’t have tremendous weight for me. Maybe it’ll turn around next issue, but right now it’s not too hot in my opinion.

The ending of the book feels like it should be more interesting but it isn’t. It just feels like they just cut in the middle of a scene for some reason.

Maybe there is a bigger plan in place. Right now, it just feels sort of directionless.