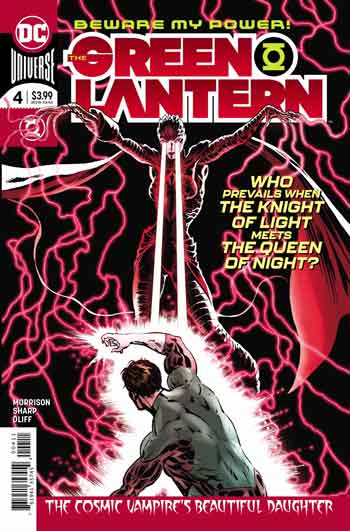 “You seek the Blackstars? I am the black star. I feed on light.

So, a Blackstar cadet, a four-armed mercenary, and a storyteller walk into a bar.

Each of them has a tale to tell.

Each story a piece in the mosaic of our unfolding saga.

Each, too, a step in the path towards Hal Jordan’s inevitable confrontation with the mysterious rogue force of Darkstar enforcers, and the Controller who leads them.

All of them as well, somewhat notably, showcase the activity of one of the most dire threats in all of the known DC Universe. The life-stealing feeding frenzies of the dreaded Sun-Eaters. And their kin.

As if planet-stealers weren’t enough.

But Grant Morrison’s run of The Green Lantern is nothing if not ambitious… and thorough. Matters of scale are merely one more color on the palette – from the microscopic to the truly cosmic, all forms of life and their activity are on the table.

And all forms of anti-life apparently.

Sun-eaters have a long history in the DCU. From the Legion of Superheroes, to the planet of Rann, to planet Earth and the Justice League, these enormous vampiric entities have been a royal pain in the ass for the heroes of the universe across centuries of DC stories.

And it appears they have a role to play in this one too. Or at least, certain aspects of them do.

Our first story features a Darkstar we’ve met once before – the dread Countess Belzebeth. Remember when Evil Star was drained dry of his stellar energies, and left a dessicated husk back in issue #2?

Turns out she’s the granddaughter of Sun-eaters. There is history that tells us that Sun-eaters at a certain point in their lifespan, and once they’ve consumed enough energy, evolve to take on humanoid form, and a greater sentient agency within the cosmos.

Belzebub it appears is one such being. Or rather, the daughter of one. The first Highborn of the Luciphage, in fact… which sounds rather ominous. Thus, her appetites. In the Darkstars and Controller Mu, it seems, she has found the perfect assignment –  one which is more than willing to allow her to feed as she desires, in the service of their mission.

We see just how dangerous that appetite can be when she descends upon a world that has locked away a certain Anti-matter ‘Wrong Man’ deep in their planetary vaults. One they are unwilling to part with. For almost anything.

It is one of my favorite bits by Liam Sharp in this issue, Belzebeth’s depiction. Whether striding about in her away-world battle regalia, or standing there bare-headed, sleek and venomous. Truly, Belzebeth is the Cosmic Vampire’s beautiful daughter.

Leaving me only to ask, where the hell then, is her father? Hm.

The second of our stories, features actual Sun-eaters (still in their larval form) and… Hal Jordan the Green Lantern, who once again demonstrates why he inspires such devout loyalty and admiration amongst his fellow Corps members. Faced with a breeding pair of Sun-eaters about to give birth, on a fateful course with a Galactic Nursery of baby stars, he leads the charge to corral and capture the monsters. Thankfully he’s faced this sort of threat before, so he knows just what it takes.

But even that doesn’t spare him from the dressing down waiting for him back on Oa. There’s still that little matter of insubordinate lethal force from last issue he has to reckon with.

But Jordan’s a resourceful sonavagun. And that leads us to our third story. I won’t ruin that for you here, but suffice to say, it appears Hal Jordan has learned enough to decide it’s time to make his play, whatever the Guardians do or don’t have to say about it, and he’s eager to cut-out the middle man to get on with it.

Good thing he’s got a bargaining chip. And that he’s come bearing gifts.

Next Issue: Blood in the water