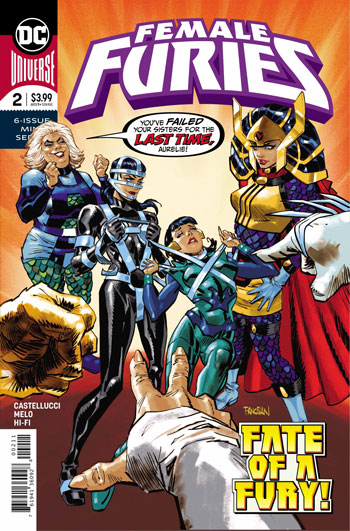 The first issue of this comic book was both smart and topical.

Cecil Castellucci proves herself again as one of the best writers in comics. She takes what we normally see in a comic book and shows us another way to look at things.

We start off the issue in The Fire Pit Bar on Apokolips.

Barda and Aurelie are sitting having a drink and they are very upset at themselves. Barda asks Aurelie why she failed and Aurelie replies that she couldn’t let what happened lie and that she snapped. Then a few men show up and act sexist. Barda punches the lights out of one of them.

Barda and Aurelie drink some more. It’s a strong scene to start the issue. Then Barda tells her to get it together and leaves the bar.

What happens next was completely disturbing and unexpected.

Aurelie is sitting there. Willik comes over commenting on what a tough break that the Furies had. Then he says that he though he would come over and “offer some comfort.”

He then sexually assaults her at the bar while she is sitting there and threatens her life if she ever abandons him or doesn’t do what he says.

It’s a disturbing scene and it’s horrifyingly drawn by Melo. We get to see some of the Furies in action and go on some missions. But the crux of the issue is the Aurelie story. It’s a powerful one and one that is relevant to today’s times.

Aurelie does confront her attacker and it’s a breathtaking scene. I commend the creative team for handling the sensitive subject matter with respect. They do a fine job and make this book more than just a standard spin-off book. They turn it into something unique.