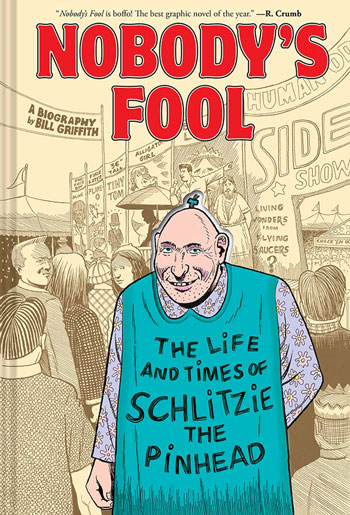 Story and art by Bill Griffith
Published by Abrams ComicArts

During the ‘70s, Bill Griffith’s oddball creation Zippy the Pinhead was a cultural figurehead as big as R. Crumb’s Fritz the Cat and Mr. Natural and Gilbert Shelton’s The Fabulous Furry Freak Brothers. Decked out in a bright yellow mumu and best known for his catchphrase, “Are we having fun yet?,” Zippy would act as a visitor to pop culture as he made biting comments on modern trends.

Griffith’s creation was born from an obsession with real-life counterpart Schlitzie the Pinhead, a Brooklyn-born sideshow performer who became a star on the circus circuit. Born with microcephaly, Schlitzie’s story is one of some heartbreak and cruelty, as well as human kindness, charity and joy as a boy from the Bronx went on to become a cultural icon.

Griffith’s Nobody’s Fool: The Life and Times of Schlitzie the Pinhead is a labor of love that follows the tale of Schlitzie from his humble beginnings in the Bronx to his meteoric rise on the traveling circus circuit.

Represented as a female for most of his career and possessing the intellect of a toddler, the tale of Schlitzie the Pinhead, aka Schlitze Surtees, aka the Last of the Aztecs, aka Princess Haha, aka The Missing Link, aka Simon Metz, is a tale of both joy and tragedy, beautifully told through Griffith’s illustrations and words, which shine with the obvious heartfelt adoration the comic artist has for the performer. 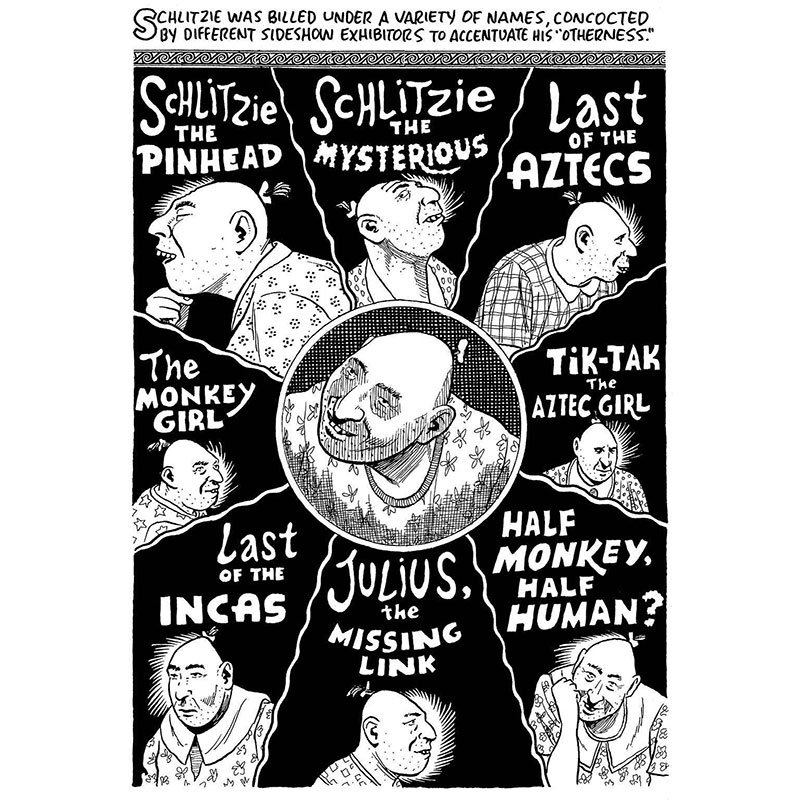 The graphic novel starts with Schlitzie washing dishes, a favorite pastime for the entertainer that stems from his early childhood and a dearly loved Campbell’s Soup dinner plate that brought him comfort. From this small act a tale unfolds the biography of “Simon,” who was sold to the circus by his struggling parents who were unable to afford a “different” child. Renamed and rebranded for the sideshow audience, Schlitzie’s mother visits him one last time, offering him his favorite plate as a keepsake to the time he was her Simon.

From that moment on, Schlitzie’s star was on the rise. His work with Ringling Bros., Clyde Beatty Circus, Tom Mix Circus, and Foley & Burke Carnival, as well as his screen work with Tod Browning’s Freaks and Erle C. Kenton’s The Sideshow made him one of the most successful sideshow performer of all time.

(Note: There was a Zip the Pinhead, aka Zip the Whatisit, who also toured at this time, but he was an African-American performer with little in common with this comic-book counterpart other than the name.)

The book’s collection of small remembrances, tales and memoirs of Schlitzie’s life adds a to the humanity to the sideshow performer beyond the odd circus postcard and random footnotes that remain. From his performance in the movie Freaks to the brief time he was committed to the Los Angeles County Hospital, major beats in Schlitzie’s life are recalled for readers with the utmost tenderness by the author.

The book is a testament to a great performer and an innocent soul. Schlitzie is remembered by those who knew and admired him as a completely guiltless figure, a child-like character who only wanted to be happy and bring joy to others. He was beloved by all who got to know him and loved all who made the effort.

And thanks to this book, his legacy will not a forgotten.

The art still of the graphic novel captures the life of Schlitzie in stunning details. It beautifully reflects the feelings of the tales in eloquent detail. From a drop of the head during sad times to a beaming smile when performing, the art captures the small nuances of both Schlitzie and those who interacted with him without have to rely on a narrator.

In the end, Griffith does a great service to pop culture with Nobody’s Fool, as the the story of Schlitzie is exquisitely captured on the page for all to read.

Or as Schlitzie would say, “It’s boffo!”