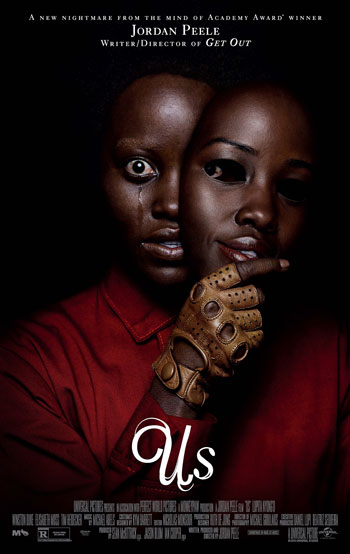 Is it better to burn out than to fade away? That’s the question I asked myself midway through Us, the latest film from writer/director Jordan Peele.

After coming out swinging with his horror/satire debut, Get Out, Peele was already being positioned as a horror wunderkind by the media and many horror fans, as evidenced by his hiring to be the host on the new Twilight Zone series that will be hitting streaming next week.

However, Us finds Peele attempting to carry his momentum as a promising new filmmaker, though perhaps applying a bit too much pressure on the gas pedal, crafting a film that movies a bit too fast for its own good and can’t keep up with its own admittedly brilliant premise.

The film centers on Adelaide Wilson (Lupita Nyong’o) and her family: husband Gabe (Winston Duke), daughter Zora (Shahidi Wright Joseph) and Jason (Evan Alex). While visiting their summer home in Santa Cruz, Adelaide becomes increasingly unhinged and paranoid, triggered by a childhood trauma she suffered on the beach as a young girl. When a family of strangers break into their house looking exactly like them, the family engage in a fight for the lives in an attempt to survive the night, with Adelaide realizing her past has come back to haunt her.

The opening shot, a circa 1986 TV flanked by a VHS box of C.H.U.D. as the screen plays a “Hands Across America” commercial, sets the tone for what we’re to expect. In many ways, this is the most interesting shot of the movie, especially in hindsight. Peele sets the film he’s riffing on and the sociopolitical event that inspired the film in the first place. Peele being political with genre isn’t something to be surprised, yet this feels oddly blunt, especially after Get Out walked that sub textual tightrope a bit more skillfully.

Conversely, despite that subtext being lost, the characters feel more archetypical.

Peele’s films are not “black” films, but they do employ large black casts and specifically black actors as the leads. The characters in Us are seemingly perfect molds of 80s horror movie family roles: the all American goofball dad, the neurotic mother, the stuck up teenage daughter, and the awkward geek son. It’s interesting to see these roles, almost always fulfilled by white actors, played by black actors without even any attention given to this casting in the first place. Not once is there a reference to their skin color, which is oddly refreshing. It shouldn’t be, but in today’s hyper-political entertainment culture, it strangely is.

That’s not to say that characters are all winners. Nyong’o easily walks away with the movie, crafting dual performances that are equally chilling and heartbreaking. Winston Duke, as the bumbling dad, brings a hefty sense of comedy and heart to his albeit one dimensional role, offering a great sense of comedic relief between horrific set pieces. The kids are rather superfluous and frequently annoying and, whether Peele intended it or not, are reminiscent of the worst of 80s horror movie brats. If they’re not so forgettable that they’re blending into the background, they’re just eyerolling hackneyed.

Despite my seemingly negative perspective up to this point, I rather enjoyed Us for the first act. The opening scene is truly chilling and taps into primal childhood fears that we often forget at best or bury at worst. Ironically, it’s not till the doppelgänger family show up that things quickly begin to unravel. Peele attempts to world build yet is unable to keep up with the admittedly ambitious plot he’s spinning. By the second act, the film attempts a 28 Days Later level of scale, but lacks the transition to and the foundation to really support such an abrupt shift in narrative and pacing. It’s near cinematic whiplash and by the time he actually attempts to explain the hot mess he’s presented us in the third act, I’m not sure even the greatest filmmaker, let alone a sophomore director, could deliver something even resembling satisfactory.

For a first-time director, Peele had a solid grasp of shot composition and tension in Get Out. Stand out sequences, such as Chris entering the Sunken Place or the gardener charging head first at Chris, are still etched in my brain as some of the most iconic cinematic moments of that year. Those same hallmarks of style are still evident in Us, yet they are also accompanied by some puzzling direction decisions. The action scenes frequently feel poorly choreographed and under lit, preventing the audience from understanding how is being hurt and how. It’s not a good sign when I ask myself halfway through the movie “Hey, how did they get hurt?”, especially when it impacts crucial plot turns. There’s also a brutally unnecessary split diopter sequence during the film’s climax, yet it’s awkwardly framed and one of the subjects if unnecessarily out of focus, so it doesn’t quite have the impact I’m assuming Peele meant it to. Brian De Palma, Peele is not.

I reference De Palma, because so many reviewers and media pundits are already ascribing Peele the title of the new “master of suspense”, despite having only made two films within the span of two years.

Remember the last time we were quick to give such a title to a promising new filmmaker? We got The Happening and Avatar: the Last Airbender. The Internet hype machine, something I’m admittedly a part of at times, is so quick to elevate a fresh voice to canonical status without considering that they’ve only just broken out. Peele has clear knack for ideas, however a 50% track record in execution between two films doesn’t solidify him as an all-time great or a one trick pony, and I think it’s important that we let him naturally develop as an artist before etching his name in the records books.

Us is an ambitious attempt to one up a dazzling debut, but ultimately falls into the sophomore slump common of so many “brilliant out of the gate” filmmakers. Time will only tell what Jordan Peele is capable of, and despite not liking the final product of his latest effort, I’m still excited to see where he goes. It’s unfortunate that Us is wrecked by its own ambition, belaboring audiences with a horribly on the nose message without the entertainment value to back it up in the end.

“We have met the enemy and he is us”. Sure, but what else do you got, Jordan?