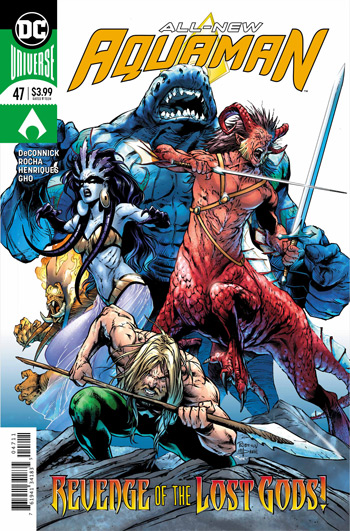 The fury of the Old Gods and the Sea vs an amnesiac Aquaman wraps up in Aquaman #47. The fifth and final issue of the ‘Unspoken Water’ arc from writer Kelly Sue DeConnick returns totems of the King of Atlantis to Arthur’s hands as he gets one fathom closer to finding out who he is. Rocha on Pencils with Henriques on inks tell a story with mystical sea beasts that would find themselves at home on screen with dragons from Game of Thrones.

Much like the recent illustration of Daredevil’s powers in the comics, Rocha gets to draw the Super Friends ‘The Call’ to the creatures of the sea, emanating in concentric circles from Arthur’s Third Eye. The Old Gods respond to the beacon and help defeat the evil Namma, mother of Aquaman’s rescuer, Caille.

What was great for me, besides the 22 pages of non-stop action was Arthur returning to mostly a recognizable version of himself by the end of the issue.

By befriending the Old Gods in the village and with teamwork defeating Namma, one of the Old Gods blesses Arthur with a mystical tattoo. Perhaps this is a great way to pay tribute to the actor playing the role on the big screen, or it is just because it looks cool, either way I’m fine with it. The Father figure of the Sea (go back and read the story, ya bum!) also bestows upon Aquaman his Trident at the end of the issue.

Is Aquaman headed back to Atlantis now that he has reconnected with the forces of the sea?

I do like the parallel between The Flash’s Speed Force mixed with the power of the Gods to give Aquaman his powers in this current iteration. I also think it’s cool the way DeConnick has introduced her own underwater mythology to this long-standing character.

There is definitely more to explore with Old Gods in her run or of someone were to revisit in years to come. Not everyone sets out to do the epic storytelling that Jason Aaron is doing in Thor, but here, the woman responsible for putting Captain Marvel in the public’s eye has introduced a nice mythology that could pay off in the long run.

Aquaman still needs to rebuild his memories but we are getting him closer to the throne and issue #50 is coming up so likely some huge thing happens then. No complaints about pacing here with this arc. Kelly Sue has the beach ball and is running with it, and if these 5 issues are repackaged as a trade, fans of the movie can pick this up as a satisfying Volume 1.

Aquaman is putting out The Call and we’re listening! Great start to Kelly Sue’s run and I can’t wait until issue #50 in a few months! We need Aqualad, Mera and Black Manta in our lives! They will be coming but it’s getting hard to wait!