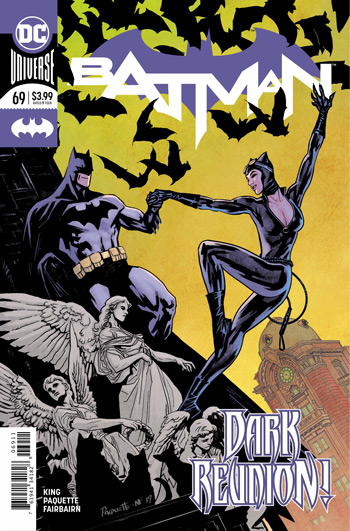 After the last issue ended, I was pumped to see where Tom King was going to take us next.

And luckily, we are treated to a special issue with guest artist Yanick Paquette. I love Paquette’s work so this was a collaboration that I was incredibly excited about. And the good news is that I wasn’t disappointed in the least! This is actually the finale to the Knightmares storyline and it’s amazing.

The opening scene is a beautifully illustrated scene where Bruce asks Selina Kyle to dance.

That’s right. The two of them are together the first time since the tragic wedding issue. It’s a bit sad and emotional and feels like a gut punch.

We then get to see Bane sparring with Thomas Wayne. This is just freaky!

Thomas Wayne looks crazy. Bane looks nuts. Kudos to King for making Bane an actual viable threat and not the wimp he has descended into being in recent years. King makes him cunning and intelligent as well as terrifying. It’s some great stuff. Praise goes to King as well for finding an actual purpose for Thomas Wayne as well.

This story of Bane and Thomas Wayne eventually pays off. But man, it’s scary and brutal. I won’t say who wins the sparring match, but man is it a shocking scene.

We get to see Selina and Bruce dance some more. Bruce is talking to Selina. He knows Bane and his father are out to get him. And he’s figuring out how to stop them. Paquette draws some of the most amazing work this title has seen since King first took over. It’s exhilarating to look at.

King’s resolution to the issue left me floored. I cried a little bit. Then I couldn’t shake it. This is the best issue of King’s run, hands down. I am still thinking about it. This is comic book excellence right here. The writing and art are perfect. This run has been great. King just pushed it to the next level. I give an A plus rating very rarely. This is one of those times.