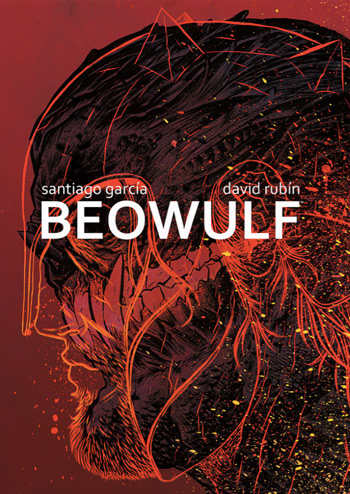 So I read Beowulf in high school and I hated it. The epic poem bored me and I just couldn’t figure out what was interesting about it. There are a few adaptations over the years in various mediums that I tried out that I was okay with. Nothing really wowed me or grabbed me.

That is, until I read this book.

I only picked this up originally for the artwork by David Rubín. I have to be completely honest in saying that it’s worth it. He visualizes the world of Beowulf so well that it shows why the story is epic.

The physical book copy is huge too, which is probably the best way to read it. You can see Rubín’s art all big and savor it. It’s truly a remarkable achievement.

García and Rubín don’t stray much from that original source material. They just enhance it, which is the best way to do a project like this.

Beowulf has to come up against the crazy beast Grendel. Grendel begins attacking Heorot on a nightly basis, killing and devouring Hrothgar’s warriors. Hrothgar and his people are depicted as helpless against the monster’s attacks and Grendel ravages Hrothgar’s hall for 12 years before Beowulf’s arrival.

What follows is a story of man versus beast. And only one may survive. It’s the classic good versus evil tale. But it works for a graphic novel simply because of the themes. A lot of comics borrow from it and sometimes heavily. It makes the adaptation flow nicely.

If you’ve read the poem then you know what happens. But the creative team makes it feel fresh. I was emotionally moved by the way they told the story. And I was sad when it was over. My teenage self would never have believed that the team actually succeeded in making me love this. Kudos to them.

This is a book that belongs on everyone’s library. The script is strong and the art is powerful. I can’t think of a better adaptation that is on the shelves. Highly recommended.