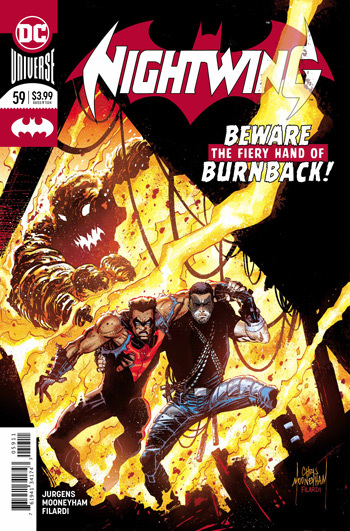 This book has felt like one of the most schizophrenic comic books in recent memory. The creative teams keep switching on this so it’s tough to get any traction on this as a reader.

How does this newest issue of Nightwing fare?

Well, it starts off pretty decently. We get a full page shot of one of the Nightwings, Malcolm Hutch saying “bring it.” I was drawn in by this for some reason.

Then, the next next page shows him training with “Ric” Grayson. The two of them tussle and it’s a pretty great sequence. Mooneyham is a cool artist and he makes this scene a sweet visual treat.

Then, after this beginning, Jurgens makes the story about Malcolm Hutch!

We get to see him climb onto a rooftop and patrol the city for a bit. We get to see Hutch visit his friend the Sarge in the hospital. It’s a very moving scene that Jurgens writes here. We get to see a confrontation with Melissa, one of Hutch’s old comrades. And we get to learn a little more about Hutch. Jurgens makes him a full character rather than just a throwaway and it’s nice to see.

Ric Grayson does play a role in the narrative here but it’s as a supporting player. Malcolm and Ric eventually team up. There is a huge fire that is going on and they go to rescue of the people inside! They are largely successful too! That is, until they come across the villain responsible and their fire based powers.

This book is the most successful when it keeps the focus directly on Malcolm. Jurgens really knows the character and does an exemplary job. The story does feel a little short by the time we get to the end. It feels more like an appetizer rather than a full meal.

The art however is fantastic. Mooneyham really is an incredible storyteller and makes each page satisfying. I love the way he can make the quiet scenes visually interesting and the action scenes feel new each time.

This book has been schizophrenic. There is no two ways about it. If they can settle on a creative team and make the book consistent, it’ll return to where we were  just a few months ago. But this isn’t bad at all. I very much enjoyed it.