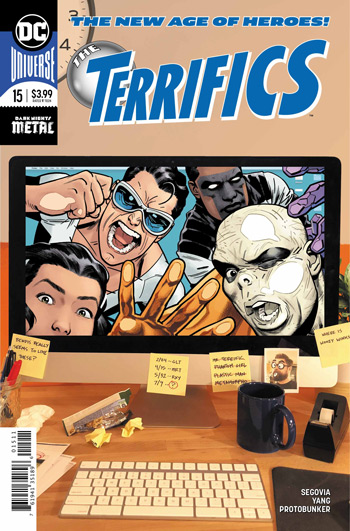 “What kinda combat training module is this?!”

The question of the day.

Welcome to a new day, and a new start, for our tremendously terrific team.

I’ll miss Jeff Lemire on this title, but he’s done his work well, leaving the new creative team of Gene Luen Yang and Stephen Segovia with a solidly established book with plenty of potential to play with.

Writer Gene Yang dives into that potential headfirst, spinning out a story that’s set to explore one of the primary differences between Michael Holt and the alternate-reality version of his dead wife Paula.

The question of faith in a divine Creator.

That’s an interesting hook, and frankly an interesting difference, given Mr. Terrific’s high-level scientific grounding. Paula, as Ms. Terrific, appears to have a technological acumen on a par with her almost/not-exactly husband’s. But presumably the philosophical emphasis she places on their common rally cry of Fair Play, comes from a slightly more… elevated perspective.

Interesting then that the Terrifics find themselves thrust headlong into an adventure of typically off-the-wall zaniness, one that seems to involve a virtual reality technology run amok, and a presumably God-like antagonist, fixing to run them through the gauntlet.

Talk about tests of divine intervention.

It’s hard to say how all this is all going to hang together, but it’s good to see the team is just as strong as last we left them. Plas is still kooky. (No sign of his son though.) Linnea is sweet and spunky. Rex is a stalwart man of action. (And all appears to be well with Sapphire, I’m happy to note.)

And Michael Holt remains a solid, serious thinker, with the soul of a hero.

May both qualities serve him well in the trials ahead.

Because my guess is, it’s gonna get trippy.