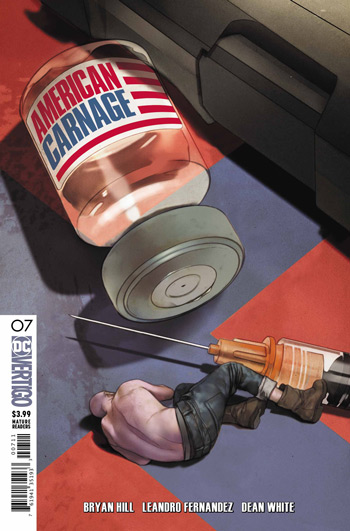 The first six issues of this book were utterly fantastic. It did make me wonder where the creative team might take us next.

Luckily, it looks like writer Bryan Hill had a greater plan in mind. This new storyline shows us that it’s a bigger narrative than we originally thought.

Richard Wright heads to Wynn Morgan’s mansion in the beginning of the issue. Wynn Morgan’s daughter Jennifer  is there and she has a request for for Agent Wright. She is asking for him to save the life of a guy named Frank Cayman.

It turns out Frank is a low level merchant for the Aryan Brotherhood.

We get to see a bit about Frank’s past.

He’s like a brother to Wynn Morgan’s daughter, Jennifer. And he stole from and caused trouble with the Aryan Brotherhood. It seems like Agent Richard Wright is headed towards crazy trouble yet again!

Jennifer reminds Richard that she basically owns him and that he has to do what she says. Richard asks Jennifer about their personal relationship before he goes. She basically ignores him. So off we go onto a new adventure!
Richard talks to Sheila about this. He sees what she can do do for him. Richard digs around to see how he might save Frank. He then confronts Frank directly and sees how he might be able to get Frank out of this.
By the end of the issue, Frank is kidnapped. But Richard might have one chance to save him. He has a meeting at the end of the issue which promises more craziness. And there’s a cliffhanger where the issue ends which is just great.
This is Bryan Hill’s best work as a writer. The whole series thrills month in and month out. I’m at the edge of my seat constantly while reading this. The art is damn good too. I can’t wait to see where this new issue goes. It’s really an amazingly well put together comic book.