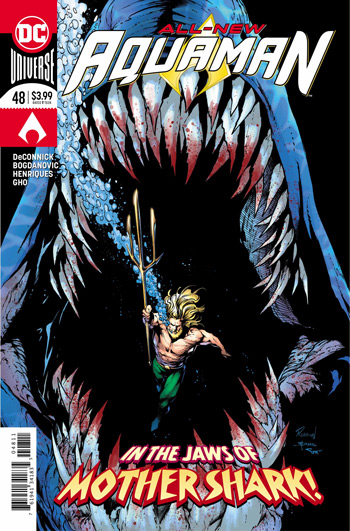 Aquaman #48 returns the birth name to the titular character and seeks to reset the memories of the amnesiac Arthur Curry by returning him to the depths of the ocean.

The story we’ve been waiting for is finally here as Aquaman is taken on a vision quest guided by Mother Shark and initiated by The Old Gods.

DeConnick now may set the record straight, and by recapping his origin story, the traditional one, and she is able to bring both the reader and Arthur up to speed.

At The Village of Unspoken Water, the man known as Andy is given a tea by the village’s Old Gods and send into a vision quest in the depths of the sunken forest with Mother Shark.

Mother Shark is the arbiter of all memories for those that die in the ocean.

Since Arthur died and appeared in The Village, he has been trying to survive and remember his past life. This issue fills in the gaps of his parents meeting, his powers to communicate with aquatic life and even some glimpses into some Justice League adventures.

Mother Shark plays “This Is Your Life” (Google it, kids!) with Arthur in a cinematic dreamscape exposing important vignettes of Aquaman’s history from being a boy talking to seals and taking on Black Manta.

This seems like a common DC, or comics in general, way of retelling the origin of someone’s past, much like the Pinpressions retelling of the explosion of Krypton in Bendis’ Man of Steel.

No complaints from me here, I’ve been begging Kelly Sue in my past reviews of this title to get to this point in the story and backed up by Viktor Bogdanovic’s lush, highly detailed and sometimes dark visuals really takes the story where it needs to go.

There’s an aquatic and dreamlike narrative told to excellent effect in this issue, with Aquaman swimming in and out of Mother Shark’s exaggerated mouth, a super-powered Pinocchio being shown glimpses of his past adventures by himself and alongside Aqualad.

Aquaman aka Arthur: The Reluctant King is brought up to date with all of the major players in his life up to that point, saving the best for last. Who is this red haired goddess that appears to him in visions?

It’s Mera and Mother Shark has saved the best for last. What will Mera mean to Arthur now that he is ready to return to Atlantis? Will they be friend or foe? Tune in next issue!

While this issue was basically a clip show, I don’t mind how they got there with the lead up story with The Old Gods of the sea and having Aquaman fight with just his skills and none of his legacy. Glad to have more traditional Aquaman stories coming down the pike and to see him get back on the old seahorse! I’ll be looking forward to this hero journey back home and seeing DeConnick take on the power struggles in Atlantis, where Mera rules in Aquaman’s absence.