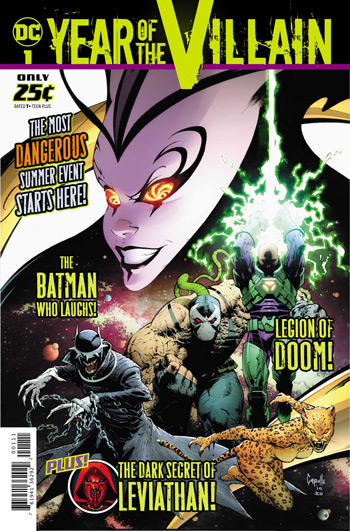 This book is part of the fallout from the recent events in the Justice League titles. And it’s going to lead into a year long DC Comics event! This is the book that gets everything going! So, I guess the question is, how was it?

There is fun to be had, but honestly, from the outset I’m completely confused why this was suddenly necessary. The villains of the DC Universe are taking center stage (much like the Forever Evil crossover!) and things aren’t looking too good for the heroes.

The story starts with Amanda Waller in the White House going to talk to the President.

When she gets there, Lex Luthor and the Legion of Doom are sitting the Oval Office (not unlike the “President Lex” storyline) and things are looking bad. From there, the plot kicks into effect.

We see Luthor talking to Brainiac about their idea. They are going to help the villains of the DC Universe find their full potential. And the villains are going to be supportive of each other. This sequence drawn by Jim Cheung is nicely done, but somehow feels long.  It feels overwritten to the point of inducing anxiety.

The book sets up the rest of the book. We see how the heroes react. We get to see a nicely Illustrated sequence with Green Arrow and Batgirl by Alex Maleev. At that moment I wanted Maleev to draw either of their titles pretty much immediately. This sequence is great and well done.

Honestly though by the end of the book I was a tad bored. I keep waiting for something big to happen. But I realized at the end that it’s just a big set up. I’ll see where it goes, but I do have one glaringly obvious question.

How does this  affect the Doomsday Clock storyline? I get that the book is behind, but was this book rushed out to ignore the implications that were addressed in that storyline? Is the Rebirth over? These are things that worried me as I started reading this. Hopefully, DC answers with carefully constructed storylines.