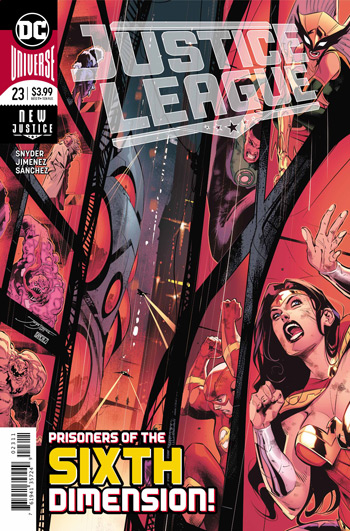 “The truth is, in most universes, at the end… it comes down to a battle between you and him. Will to win, versus faith in a happy ending.”

To be clear, this little snippet of dialogue is Scott Snyder talking about Superman and Batman. Setting them up as the yin/yang of… what? Possible paths of human evolution? A conflict of heroic ideals? Contrasting avatars of justice?

Or is this all just about the World Forger’s own little passion project?

It’s tempting to go big with the interpretation.

Surely, there is no shortage of Batman vs. Superman stories to draw on as precedent. Heck, it’s become a trope in and of itself.

Every great DC writer has had a defining take on these two, and the underlying tensions of their relationship. It’s no surprise Scott Snyder would come around to it eventually.

I have to say it snuck up on me a little though. There’s been hints of this all along, from Clark talking Bruce out of making a new and improved version of the moon, to Batman’s regular casual musings that fighting fire with fire might be the only way to survive the oncoming crisis.

But suddenly now, we’re in the thick of things. And it appears that the choice before the Justice League has become the defining moment in our story, where they get to decide who they are truly going to be. And live with the consequences of that.

And while Batman may see value in a path of least resistance, Superman as always held to the tradition of doing a job right – or not at all.

Just as a character working, there’s logic to it I suppose. Though I do really wish Snyder had gotten a run of Superman stories under his belt first, one as dedicated as his love of Batman has been, before attempting this set up.

But here we are. The new defining Batman vs. Superman story. Or so it would appear. And it’s a doozy. Sort of a redefinition of ‘go big or go home’.

Because one of these choices leads to winning, while the other one, I’d venture to guess, leads to victory. And all of creation will be forced to pay the price of that decision.

But is all of this really the defining conflict it’s being made out to be?

The crux of the problem is that the World Forger in his infinite view of possibilities, has concluded that the only path forward to a ‘Justice formation’ – the sort of enlightened multiversal age that will signal moral maturity to the cosmic judges of the Omnivoid – is one in which the good guys have killed off or locked away all the villains, and every other dissenter, before any of them (and Perpetua herself, one assumes) are able to ruin it for everyone else.

You know, by existing.

Why such a nigh omniscient agent of original Creation should have such a remarkably limited grasp of morality itself is not entirely clear, but presumably the World Forger has convinced himself that indeed this grim path forward is the ONLY way. Period.

Every other path, it seems is… impure. And leads to… something bad. Destruction? Omniversal condemnation? It’s not exactly clear what to be honest. But something bad. Presumably.

And so, the World Forger has created a world in which any possibility of Superman standing for the full light of truth and justice has been so thoroughly eliminated that even Clark’s best chum and beloved wife have become ruthless fascist true-believer versions of themselves in this dysto-utopian perfect society, one on the verge of absorbing Superman’s very life essence into the World Forger’s own Future-Superman aspect, forevermore.

Talk about an identity crisis. It’s the definition of Justice itself.

As if all that wasn’t enough of sign however that something is severely wrong here, at least we have the pure rage of a child, to set our heroes right.

Shayne, the merely-yet-to-be child of Hawkgirl and Martian Manhunter, is nonetheless real enough to have apparently felt the fear and pain of every living being that has been executed in this reality, in name of its greater ‘justice’.

And he’s not buying it.

Unfortunately, it appears that the, let’s say full immersion effect, of this future-reality has had a somewhat more influential impact on our Justice League members than we might expect or wish for.

Because until Shayne breaks through to their better angels, some of them are… not sure.

Which, OK, I can see it with John Stewart, former military man. I guess. Even Kendra.

But Barry Allen? The Flash? Excuse me? Boy, that one’s really hard to buy. (Or anyway, it used to be.)

And then there’s Batman. Who, to be fair, has been put in an impossible situation. Asked to make an impossible choice. But if we are to believe our narrative, it’s a choice he finds himself sincerely considering. And one, in the end, that he has to act on.

Because let’s face it, Batman and Superman may be many things, and may represent many different things in the grand scheme of it all. Things that are often in seeming opposition to one another, sure.

But I doubt very much that, in the end, justice is one of them.

Even if that leads to impossible choices…

Or partners you with the most unlikely of bedfellows…

Next Issue: Dark side of the moon.