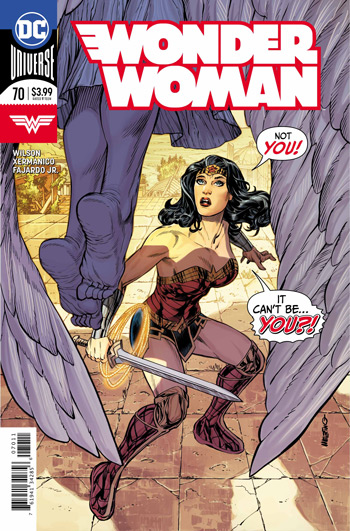 There sure is trouble in paradise in the second part of “Love is a Battlefield” in Wonder Woman #70.

Diana, Aphrodite and crew are stuck in Summergrove, a suburban town drunk on love from the spell of Aphrodite’s transgender son Atlantiades.

Atlantiades is also seeking a place of refuge after the mysterious fall of Olympus and has taken refuge in this town, using their powerful love magic to encourage townsfolk to honor their every desire, even if not in their own best interest.

All is fair in love and war, but what if acting on your truest desires only was the way the world worked?

Surely the payoff might feel good initially, but this kind of behavior will eventually have consequences!

The Summergrove, CT is having a love-in of its own, with partners leaving each other for the babysitter and shirking responsibilities.

The acolytes of Atlantiades are about to rise up as they start to feel Cupid’s arrows effects wearing out, like coming off of a three day high.

The acolytes aren’t the only ones experiencing exaltation and good vibrations. Maggie is instantly infatuated with the son of the love goddess and expresses her love to them but she is stopped from taking their offer of an hour of passion because they might never recover from it, as the mortal lust is not easy to resist.

Aphrodite explains why she and Atlantiades have had 1000-year-old mother and son spat. Aphrodite put Atlantiades on display to the Olympian gods out of pride in what she had created, but was not sensitive to Atlantiades’ needs at the time.

Meanwhile, Diana is forced to wrestle with her own relationship with a mortal, Steve Trevor, through a series of visions that she first thinks are reals but turns out are a manifestation of Atlantiades’ powers. Her main struggle is that she is in love with a mortal that will eventually grow old and die, how will she deal with his death or absence? Is she selfish for wanting this love from the pilot?

The Amazonians and Olympians are now here on Earth and the Sword of Antiope is leading our heroes through Summergrove for a reason. Does Atlantiades have any answers for the team? Is this demigod responsible for ruining the lives of the people of Summergrove?

These are questions that remain to be answered as will keep us coming back to Wonder Woman. Diana has her Dagobah dreams by the end of the issue but she must continue the mission.

Another great issue here giving us insight into the lives of the immortals and what love means to them. Xermanico doesn’t get to draw fight scenes this time around but gives us beautiful smaller moments, and plenty of drunk on love townspeople.

Wilson’s Wonder Woman is a rich book, thoughtful and crafted with some nods to mythology. She gets to define Atlantiades and their power set, overall a great new addition to the cast of characters in an already diverse and interesting ensemble.

Next up: Summergrove Gone Wild!