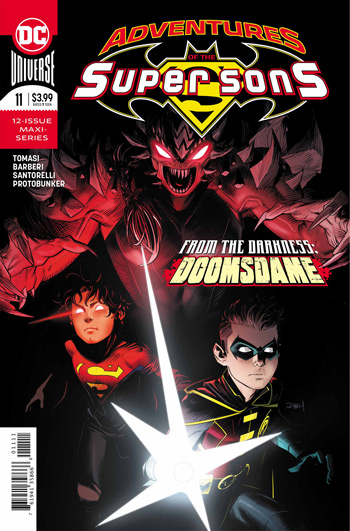 This has been a great ride! I’m very sad that this is the penultimate issue of the series. Peter J. Tomasi has been absolutely knocking it out of the park with each issue that he writes and this one might just be my favorite one of the run thus far. It’s full of adventure and it’s a lot of fun.

Rex Luthor and his criminal empire called The Gang have spent the entire length of the series chasing the Super Sons.

At the beginning of the issue, we see Rex and his army finally confronting them.

But here’s the thing: Robin and Superboy now have an army of their own. It now seems like all out war is about to break out!

And it totally does!

We get one hell of an action scene! This allows artist Carlo Barberi to cut loose! The action is well paced and strong. He also knows how to make interesting character designs.

I also have to commend writer Peter J. Tomasi on this.

The Gang is comprised of miniature kid versions of the DC Comics villains. This allows Tomasi to really have a good time. The funniest moment is when Robin confronts a miniature kid version of Bane and he says “Kid, I fought the full grown Bane. You’re hardly going to be a problem.” It’s hilarious.

Likewise, Superboy fights “Doomsdame” which is wacky in of itself. It lends a unique tone to the book which is just wonderful.

By the end of the issue things are looking bleak. It’s a crazy ending where all seems to be lost. Will the Super Sons get out of this? Is there any hope left? Or is everything just going to go to hell in a hand basket? I don’t know but I can’t wait to read the final issue to find out!