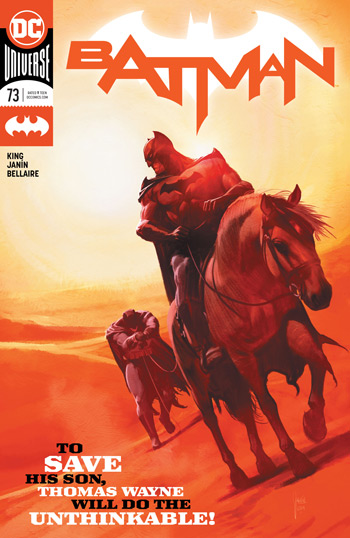 “The Fall and The Fallen” continues in this issue. And it’s another doozy of an issue by writer Tom King. I cannot say enough how good this title is. I did think the last issue got a little out of hand but this issue more than makes up for it. It’s a solid entry in Kings’s overall story.

As the issue begins, we see a familiar figure traveling by horse through the desert. He is riding a horse and singing a tune.

That figure is dragging a few things with him.  One is Bruce Wayne. The other thing seems to be a coffin. Can this mysterious figure indeed be Batman? And what the hell is he doing?

It’s Batman all right, but not the Batman we are accustomed to. You see, it’s the Thomas Wayne, Flashpoint Batman, and he is the focus of this issue!

He comes across some people in the desert who he must fight. And so he does. The whole time, he is just singing away. He makes short work of these people and then continues on his way. He makes a campfire.

Suddenly, Bruce wakes up and screams Bane’s name. The two of them have a talk. It’s extremely weird. And then, we find out who’s in the coffin. The answer is really something unique and great.

The issue does feel a little incomplete. But that’s okay as there’s still another chapter of this story. King and artist Mikel Janin work so well together. The ending is a cliffhanger but it seems to be a newer direction for the series. I’m liking it. It’s a great issue and it’s full of even more promise. Well done.