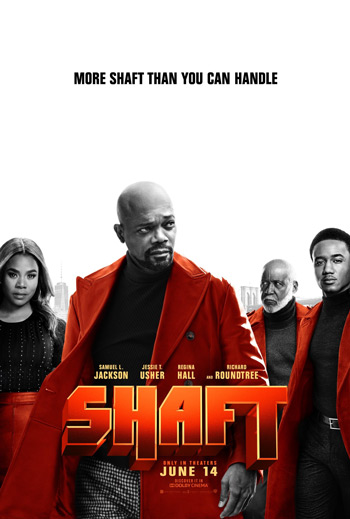 Who’s the black private dick that’s a sex machine to all the chicks?

Who is the man that would risk his neck for his brother, man?

Who’s the cat that won’t cop out when there’s danger all about?

Samuel L. Jackson is back as Shaft. Smoother than ever. Badder than bad and still a bad ass mutherfu…

The new Shaft film, directed by Tim Story (Ride Along) and written by Kenya Barris (“Black-ish”) and Alex Barnow (“The Goldbergs”) is an entertaining as heck, laugh out loud movie.

To give you an idea how good the movie was and just how much the audience loved the movie, I am going to have to go see it again as I missed about ⅓ of the dialogue because there was so much laughing and cheering that the crowd actually drowned out the soundtrack of the film.

Reprising his role as John Shaft, policeman turned private investigator, Samuel L. Jackson is his most Sam Jackson-y. Along for the ride this time is his estranged son J.J., an F.B.I analyst. After J.J.’s best friend is found dead, J.J. finds himself neck deep in trouble while investigation, what he thinks, is a murder. J.J. must unwillingly turn to his dad for help in diving deep into the underbelly of Harlem.

The last Shaft film took place in 2000. A lot has happened in the world since then. Some of the funniest moments are seeing how Shaft and other characters have to deal with and accept social equality, not being misogynistic towards women, toxic masculinity and gender assumption. I will say that it is handled both hilariously and respectfully for the most part.

The action is great. It has everything you could want from a Shaft film. The humor is non-stop and it is great seeing newcomer to the series, Jessie T. Usher, hold his own against both Jackson and original Shaft actor, Richard Roundtree. I wouldn’t say he is a chip of the same block but he can hold his own in his own way. He is as equally awkward as Jackson is cool. They play well off each other.

I went into Shaft not expecting much, I thoroughly enjoyed the 2000 incarnation and hoped to be entertained for an hour and 40 mins. I got way more than I bargained for. This movie had me in stitches and I can’t recommend it more.