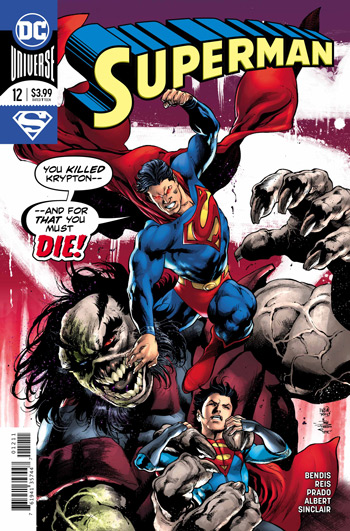 This is part of a Superman/Supergirl crossover. This has been a weird last couple of issues. So why not have a crossover?

I was pretty lost in the narrative when beginning to read this issue. I just decided to dive in and see where we ended up.

Well, it’s still rather crazy and undefined this time out, too.  We start out the issue seeing Rogol Zaar and Zod sitting around not doing much of anything. They are planning something big though it seems! It’s a nicely drawn splash page by Reis that is beautiful to look at but not much else.

From there, it becomes an all out brawl.

Reis does a lot of double page spreads here which make the issue go by even faster then normal.

Superman, Superboy, Supergirl, and even Krypto take on Rogol Zaar and Zod! They have a big knockout fight!

Then, after the craziness of the fight settles down, we get to see the Super family reunited. Eventually, they have a big exposition scene with Jor-El. Jor-El takes them all for a ride. And that’s where they end up at the place in space where Krypton used to be.  And the next issue promises some answers as to what happened!

The plot threads at the end make this a little more interesting than it’s been. We are at issue 12 though of the run of this book by Bendis and Reis and honestly, not much has happened. And this issue flies by way too quickly. It’s definitely a little better than it’s been, but I can’t wait for this story to be over.

It’s been a year at this point and I feel like we are still stuck at the same place we began at.