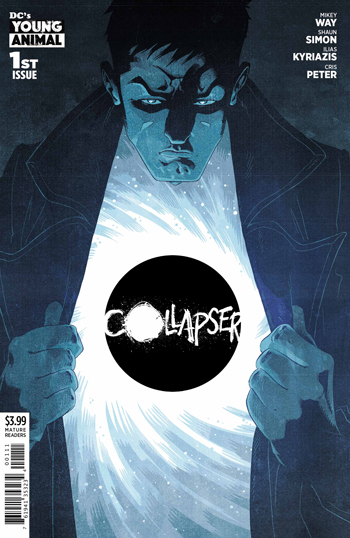 The Young Animal line over at DC lives on!

This new limited series was one of the more interesting solicitations I’ve seen on a comic recently. I was excited to dig in and see what it was all about.

I have to say, I was quite happy with what I read. It’s got a solid story to it with some dynamic artwork to boot!

The issue opens with a superhuman in the middle of the field.

The people who find her say that she is dead. They also point out that there is a alien being (in the shape of goo) on her that isn’t dead. The goo then takes off her body and flies away.

Just what is going on here?

We then cut to New York City. A man is asleep but is quickly woken up by a knock at the door. We learn that the young man’s name is Liam James. There is a delivery apparently for him. The delivery guy looks crazy and then runs away. Liam leaves the package there and goes to work, caring for people in a hospital.

While he is going about his day, Liam hears a voice in his head. His voice is a doubtful voice. It questions Liam’s decision  making. It questions his entire life. The only thing that makes the voice quiet is music, which is why he is a DJ in his spare time. That’s when Liam goes home and finally opens the box from the beginning of the issue.

It seems like somebody has sent Liam a tiny black hole in the box.

He opens it and it takes him over. He gains incredible superhero powers.  The whole thing turns Liam famous. It also takes him into some of the far reaches of the galaxy that he would never would have expected. The whole thing is really a bunch of fun. It’s also highly emotional in a very real way.

The writers do a great job of making Liam relatable instantaneously as a character. I identified with him immediately and it’s a pretty impressive feat. The artwork perfectly complements the story and is dynamic as well.

This is a well done first issue. Kudos to the creators and everyone over at the Young Animal line of unique comic books.