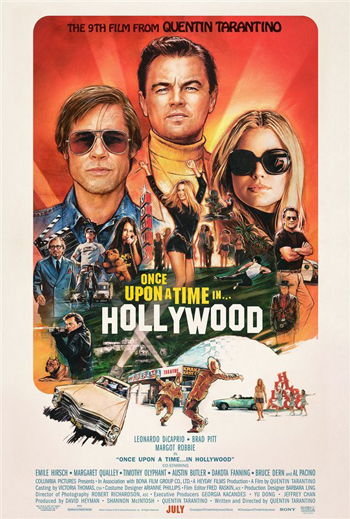 Quentin Tarantino is a man out of his time.

Unlike most filmmakers with clout in Hollywood, he effectively distances himself from having any social media presence, despises any concept of filming digitally, and treats every project like multimillion-dollar playdates in the cinematic sandbox of his youth.

Yet, while nostalgia for the genre films he grew up on has always been at the surface level of his work, an outright yearning and melancholic resignation that that same period in film has largely been forgotten outside of cinephile circles hasn’t. Once Upon a Time In Hollywood, his latest film, feels like the apotheosis of those feelings: a rose-colored view of Hollywood past in which Tarantino visits old friends and brings us along for the ride.

Set in the sizzling summer of 1969, the film follows faded TV star Rick Dalton (DiCaprio) and his longtime buddy and stunt double Cliff Booth (Pitt). Dalton’s peak has long since passed him by and he has since consoled himself with frequent guest spots in other popular shows.

At the same time, actress Sharon Tate (Robbie) moves in next door, putting all three of them on a collision course with the infamous Manson family lurking just outside the luminous Hollywood hills.

Since the passing of his longtime editor Sally Menke in 2010, Tarantino’s films post-Inglourious Basterds have struggled with pacing. Django Unchained and the The Hateful Eight both occasionally reek of a director who has locked everyone out of the editing room but himself, leading to scenes that frequently go on too long and conversational dialogue that quickly slips from witty to banal and indulgent.

Once Upon in Hollywood, ironically enough, is arguably that eye rolling tendency to the nth degree, yet it strangely works. The film is no rush to get anywhere at all, following these characters from rocky acting gig to afternoon drives with hitchhiking flower children with no purpose other than to ask “Damn, aren’t these guys fun to be with?”.

Tarantino’s affinity for the likes of Howard Hawks’ Rio Bravo shines through in that he’s not interested in getting his characters to a destination as he is in how they get there.

While the revisionism of his last two films is most certainly present, it’s more Jackie Brown than anything else, a wistful one last hurrah for someone who feels that their time has long since passed and decide to go out as best as they can.

Shot in pristine 35mm, this is a film that must be seen projected in that format to truly be appreciated. I’ve often said that film looks better than digital, but it wasn’t until now that I was able to put my finger on why. The softer focus and grain really give this nostalgia piece a weird sense of timelessness.

The neon-soaked streets of LA could pass for something out of The Driver or the rocky crevices of the outskirts probably showed up in episodes of Kung Fu more than once. It feels like we’ve actually been transported out of our own reality and into Tarantino’s fantasy, something the best films do to all of us. If this film was shot digitally, it likely wouldn’t have passed as anything more than period kitsch.

What shocked me the most is just how funny the film is. It’s not even necessarily trademark Tarantino black humor masking grotesque violence (for the most part anyway), but genuine laughs at the expense of his character’s ignorance and their simultaneous optimism in the face of irrelevance.

By the end, I couldn’t help but love these scrappy underdogs who ostensibly are anything but that. Brad Pitt’s Cliff Booth is easily the star of the show, acting circles out of anyone around him. Anytime the film hits a lull, which it frequently does due to the aforementioned pacing/editing issue, his character lights up with a sense of energy and charisma that could turn any frown upside down.

This could easily go down as Tarantino’s most divisive film, supplanting the previously infamous Death Proof by the sheer virtue of the real-world events it plays with. The real-life Tate Murders hang over the film like a guillotine, ready to decapitate any good will that the ostensible buddy comedy builds up over its indulgent 2.5 hour running time.

By the time those events are actually addressed, audience members will likely rush to extremes, either finding them highly distasteful and exploitative as period dressing or satisfying cinematic spectacle by sheer virtue of what movies can do that the cold indifference of real life and the directions it goes can’t.

Once Upon a Time in Hollywood is arguably the most un-Tarantino film in the director’s entire catalog. It’s sentimental rather than deliberately provocatory, joyful rather than edgy, and just wants you to see the sights while it has your brief attention.

The film might be a little long in tooth, but that’s perhaps because Tarantino just doesn’t want the good times to ever end, despite knowing they long since have.