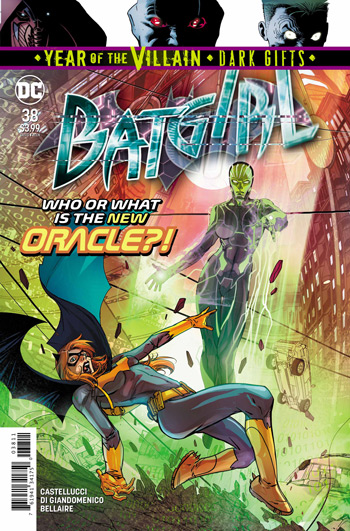 Cecil Castellucci has been doing a superb job on this title thus far and it has a really nice feel to it. I’m excited to see where this creative team might take us from here!

There’s a new Oracle in town, and man is she dangerous.

At the beginning of the issue, we see the effect that she has on Batgirl. It’s not pretty. We get to see the new Oracle meet up with Lex Luthor and they get some help from him. Lex is really planning something terrible for all of the DC heroes and it’s just getting more and more intense in every comic!

We then see Batgirl recover from the trouncing that she received. She makes her way home and collapses. Barbara has had enough and she just falls asleep.

From there, the new Oracle goes about her way in becoming a legitimate threat. Barbara spends some time trying to regroup.

And it’s only a matter of time before the two of them meet again.

Castellucci keeps the writing tight and the tension high. Oracle gets stronger and more powerful. Barbara goes back into the field to fight Killer Moth. She defeats him and gets some of her courage back. That’s when the new Oracle figures out Barbara’s identity. And it seems that it’s only going to get crazier from here.

Carmine Di Giandomenico is the perfect artist on this book. I just love his style. He makes every page one that is incredibly exciting. Matched with the story, it’s a great and comfortable fit. This book has turned around a lot. Let’s hope it stays this way for a long time to come.