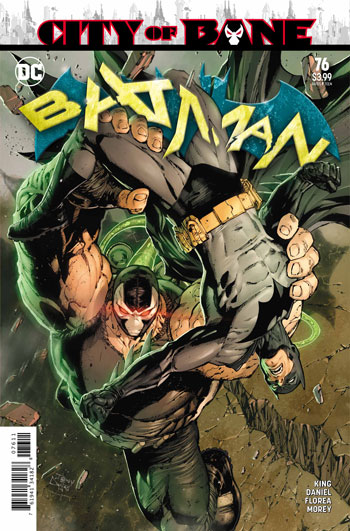 I have to say that the last issue of this title threw me for a loop! It was such a well thought out issue and put the Batman cast of characters into a storyline that I had never seen before! This issue continues right where that book left off and it only continues the pure awesomeness.

Tom King’s run on this title has been nothing short of great and this issue continues that trend!

The opening scene is Captain Atom having a meeting with Gotham Girl. He tells her that the president has forbidden any superheroes from entering Gotham. Gotham Girl taunts him.

She then wallops Captain Atom. He goes flying through the air. It’s quite a punch. King wants to show her strength level here.

Let me just say,  she has to be pretty powerful if she’s taking out Captain Atom with one punch!

After that, we cut over to a bunch of criminals making a run for it. Suddenly, one of them gets shot!

We see that it is the Thomas Wayne Batman who fired the shot in a glorious image drawn by Tony S. Daniel. The pacing is just crazy here, and it’s full of incredible energy.

From there, we see Gotham Girl beating Captain Atom and taunting him. We see this scene intercut with the villains being carried by Kite Man to safety. Gotham Girl throws Captain Atom away. We see him later beaten, lying in bed. He says that he never faced anything like Gotham Girl.

Kite Man meanwhile retreats to his lair. But it isn’t long before the Thomas Wayne Batman shows up to try to take him and the other villains out. We then get to see two Robins arguing on a rooftop as well. Things are really starting to get darker.

In the midst of all this too, we see Bruce with Catwoman. He seems to be unconscious. The city of getting out of control. What’s going to happen from here? I don’t know but I’m certainly anxious to find out.

This story is unfolding much differently than I thought it might. But I like that. King and Daniel work great here and it’s just thrilling. The end of the issue really raises the stakes too. This is another fine chapter of this excellent comic. It’s unlike any Batman story that has come before it. And I love that.