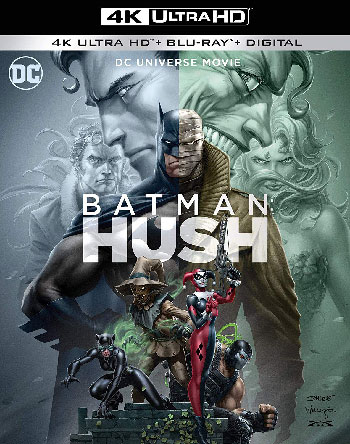 While not shoehorning in as many in the cavalcade of guest stars, the animated feature Batman: Hush is a fine adaptation of the original Jeph Loeb and Jim Lee comic. Bane and Poison Ivy appear, along with Lois, Clark and Lex.

Justin Copeland directs this one, continuing the story from the DC Animated Universe with Reign of the Supermen being referenced by Lex early in the movie.

Batman takes on Superman who has, like Catwoman, succumbed to Poison Ivy’s charms.

For those familiar with the comic, we’re introduced to all star surgeon and childhood friend of Bruce Wayne, Tommy Elliot.

Bruce is brought in to have his body restored by the doctor after sustaining injuries from Bane (Killer Croc in the comic).

The full on “Bat/Cat” romance blossoms here, with Dick egging Bruce on but Damian Wayne does not approve. Plenty of scenes are directly from major beats in the book, such as Harley’s attack at the opera. Jim Lee and Scott Williams signature style is tough to translate into animation designs, so we’re treated to Lee Batman and Joker designs but mostly the look is the DCAU house style.

What I’m mostly getting at here is that if you are a fan of the original series, you’re just getting an adaptation and not much new here. For fans of only this animated universe, and there are plenty that may have not read the original will be taken for a nice ride of reveals, uncommon alliances, and a very modern Batman that is closer to a Batman Begins than a traditional Neal Adams version of the characters.

The casting is great and mostly consistent with recent films, Jason O’Mara as Batman, Jerry O’Connell as Superman, Rainn Wilson as Lex, Jason Spisak as The Joker, and Maury Sterling as Thomas Elliot.

Jeph Loeb, head of TV at Marvel, obviously isn’t involved with the production of this series of films, and I have a feeling he would have liked to been. Hush is a modern classic Batman story, and evergreen title with new editions justifying the print runs. Jim Lee would go on to do another classic story with Frank Miller on Batman and defined the look of The New 52 after becoming co-publisher of DC.

There is a non-comic book and unexpected twist in this version. Let’s not say it is as drastic as the difference between the Watchmen movie and the book, but along those lines. For the completists and canon geeks out there, there’s a choice that is made that may have taken the bite out of the original vision, one that changes the dynamic between Bruce and his childhood friend.  Definitely not an improvement, but one more in line with previous DC animated movies that tend to rely on the mystical, magical, and rebirth myths.

This PG-13 feature has some well placed curses and sexuality but doesn’t seem nearly as dangerous as the book. The action is fine, the animation and blowout fight scenes are fun, and even the mysterious Hush is pure evil and cunning. The last fifteen minutes seem like the end of a Batman ’66 episode encouraging viewers to tune in next week! This time, Catwoman is in danger.

To be honest I can’t say I hated this movie, nor can I entirely endorse it. As a big fan of the original material, I thought I had a leg up on the story, and when things didn’t go that way I was disappointed.

What they left on the table was the whole reason to make this movie, what they gave us was some of our favorite panels on screen with scenes leading up to those splash page moments. I usually don’t rate my movie reviews but it only makes sense this time around.