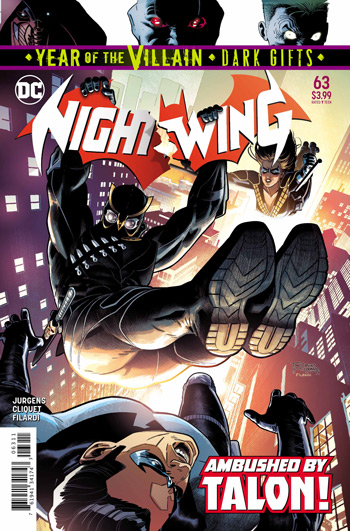 This book has been all sorts of crazy lately, but that’s part of the fun.

I haven’t been a huge fan of the Ric Grayson (just call him Dick) person,a but I am a fan of the wild story Jurgens is telling. He is juggling many balls in this book and they are all fairly interesting.

The opening of this book has the Nightwing Squad out in full force trying to stop an art heist. They are enthusiastic bunch and they are getting better at their jobs. It’s a lot of fun watching them work together. Jurgens certainly has a blast writing them and it shows, especially in these first few pages. We get to see what Ric thinks of the group and it’s pretty awesome.

The heist is stopped. The heroes are victorious!

And then they regroup and talk. They ask Ric to go out for a beer with them. He politely refuses and then goes about his way. This leaves the other members baffled. This is a nice scene that really builds everyone’s character well.

Ric goes about his day and drives the taxi.

And wouldn’t you know it but he picks up an extra special passenger; William Cobb, otherwise known as Talon!

Talon gives Ric a wonderful little speech and then leaves the cab. It’s from there that things really start to take off. The creative team creates a strong tension and it pays off nicely.

Needless to say, Talon starts to take apart the Nightwing Squad. It starts to get fairly dark too! This all is done to taunt and goad Ric. Then, at the end, it looks like Talon is looking to make it personal. It’s pretty damn great to be honest.

I think that Dan Jurgens has found the perfect collaborator with Ronan Cliquet. They work together perfectly and create a really nice book together here again. I hope that they stay together on this for a long time to come.

And if they bring back “Dick” Grayson, well, all the better.