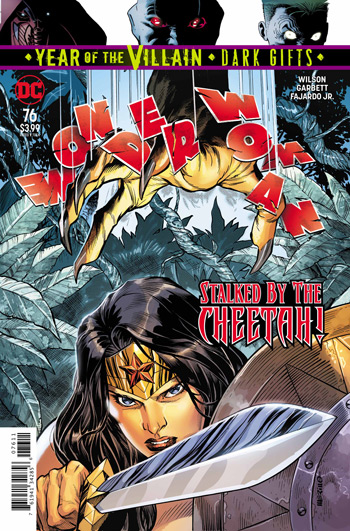 Diana is finally reunited with Steve and Aphrodite, but a new threat in the form of her rogue Cheetah carries on the DC event “Year of the Villain”.

Lee is one of DC’s unsung artists, and there are many, he boasts the skills of classic comics storytelling, honest expressions and even a few panels of action this week put this book at the top of the stack.

There is mostly dialogue in this issue, not incredibly detailed fight scenes, but the story needs a place to breathe and this is the issue that happens in.

Wilson is picking up the pieces, Maggie is left on Themyscira to train with Antiope, and even Veronica Kale gets reunited with her daughter Isadore.

An uneasy reveal shows great compassion as Wonder Woman and Kale put aside differences and Diana reunites Veronica with her daughter. Diana and Hippolyta, also reunited take a stroll on the beach to catch up.

Diana struggles with living among the world of men, and discusses this with her queen. The first few pages are beautifully written, commenting about the immigration debate that is sparked around the world these days, by deftly imbuing the story with allegory, mysticism and takes of the Old Gods.

It’s no question that G. Willow Wilson is one of the top writers in comics, an undeniable talent and can really stick the format of around 20 pages with page turning issue pacing and last page reveals that make you crave the next issue. The past few “Year of the Villain” comics from DC have had a coda of their own, with Luthor introducing a rogue to their new mission. We may be done with those inserts, but we can certainly see what mission Cheetah is on by the end of the issue.

Cheetah misbehaves by breaking into Wonder Woman’s home whole she is reuniting the Kales on Themyscira. The consequences will be revealed next issue as the reader asks themselves, “Is love dead”?

Wonder Woman retains the lofty place among the DC Trinity family of books, and I hope that people are reading this book or catch up on the trade. Past runs on the character haven’t been my favorite post New 52, but since that time in the modern era this is the best version so far. Diana’s voice is authentic as both a god and a hero, and like last month, I can’t wait to see where this story takes us!