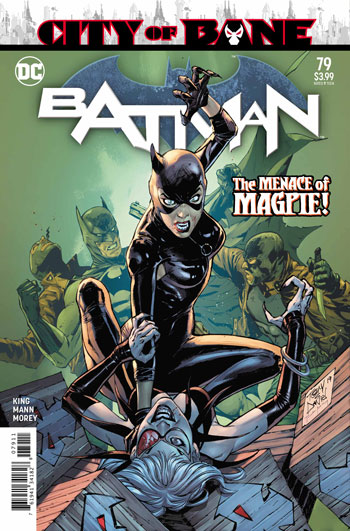 This “City of Bane” interlude is just plain awesome.

Honestly, Tom King’s run has been just excellent and this issue again proves why he is one of the best current comic book writers. Things are getting more intense and in this issue they hit an unbelievable boiling point!

The issue starts out with a brief glimpse of Bruce and Selina’s first meeting. It’s a nice callback to the storyline in Batman: Year One. It shows where this all began between the two of them.

Then, we are back on the beach, and pretty much back to where we left off last issue.

Selina is getting Bruce into shape both psychically and emotionally.

And then, Selina proposes that the two of them head out of paradise to go kick some serious ass.

That is when the issue really picks up and all hell breaks loose.

We then get a beautifully drawn sequence where the two of them do just that!

Clay Mann really struts his stuff here and just goes for it. It all leads up to one of the coolest moments over the last few issues. It also leads to one of the best splash pages of Mann’s career.

The last few pages of the issue aren’t action packed but rather they are quiet and character driven. By the end of the issue, you just know that Bruce is ready to dive back in and fight Bane. He’s back to fighting strength finally. And Bane better be watching out.

King has set up a hell of a fight. I just hope from here that he delivers. I think he should now that everything is coming to a head. I’m buckled up and ready to see where this comic book takes us. It should be exciting for sure.