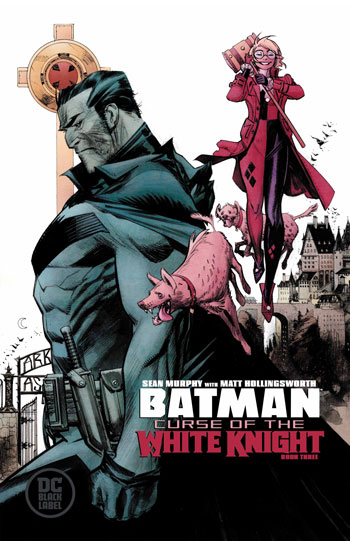 Written and Illustrated by Sean Murphy
Published by DC Comics

Sean Murphy’s work on the White Knight series pushes the boundaries while highlighting the essential core elements that has enthralled readers with Batman.

His immersive illustrations and engaging narrative shine bright in this third installment. The future of Gotham City is uncertain as our heroes are on the ropes like never before.

The opening page shows the underwater wreckage of the Batmobile. The water has a slimy moss motif with pieces of the famed vehicle scatter about. It’s sort of poetic because it represents the current state of affairs. The water is Gotham, and the Batmobile represents Batman’s current state. Batman breaks out of the car before he drowned, and there are no word balloons to argument the peril as the struggle was evident.

That is the beauty of Murphy’s art. The visual presentation profoundly exhibits the gravity of what’s occurring on the page. Even the shock on Batman’s face when Harley Quinn insists that he’s delivering her baby said more than any amount of dialogue could convey.

The combined struggle and fallout of Bruce Wayne being Batman takes center stage this time around.

The story forced Bruce to go from wanting to reveal his identity to needing to keep it concealed at all cost. Some new parties become privy to this vital piece of information, which becomes a necessary evil, which provided increased tension throughout the book. We’re dangerously close to the point where Bruce might as well not even wear the bat suit anymore.

However, the greater good requires it, which becomes a balancing act that is masterfully portrayed. Batman’s identity became a form of currency that has to be spent wisely. Some expenditures paid off while others were misappropriated.

We get some time with The Joker and Gordon, which flushed out two essential elements of the story.

One adds to the mystery of the history involving Wayne/Arkham. The other asks what comes next in a celebratory manner. Then, the answers become quite apparent in a brutal and bloody manner. The pace and execution of these moments is spot on, resulting in maximum emotional impact.

Batman: Curse of the White Knight is a gift that keeps on giving. Each issue adds more to the overall story than the last one with zero filler material. Non-canon Batman stories have the creative license to explore new horizons while keeping the familiar Batman mythos unbroken.

Murphy accomplishes both in grand fashion by changing the questions, as readers believe they have the answer.