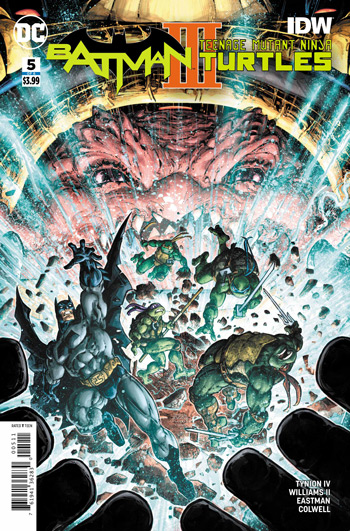 IDW and DC’s joint venture Batman/TMNT III hits its penultimate issue this week with #5. It’s Batman and the green ‘modern’ turtles with Shredder vs Joker and the Foot Clan robots.

As this multidimensional mayhem draws to a close, for the third time, Tynion and Williams sort of keep it all together even if mixing black and white styles with fully colored or painted pages makes everything look incomplete — or worse, just bad.

The book does take a bit of patience by the reader to move toward the next big action piece or cross dimensional villain reveal.

The timeline changes a lot too, and you need to follow which Dimension each of the main characters is from to follow the story and moments like Original Turtles team up with their modern versions, the interaction leaves a lot to be desired.

From the Batverse, family members are appearing to take on the Big Bads, but hopefully just one version of each, please.

Krang’s master plan to build the Ultra-Technodrome is successful, so everyone rallies for victory in the end, led by Batman and his Super Friends that includes Nightwing, Batgirl and a couple of Robins. Batman exclaims “it’s time to END this!”

I couldn’t agree more, Bats! Someone stick a fork in this turtle soup! I think I’m ready for this to wrap up.

Who knows what the thinking is for dragging this out six issues. Were the first two volumes selling like such gangbusters to warrant the extra pages?

Let me take you can to a time in the 80s when G.I.Joe took on Transformers in four issues! So much of this Turtle/ Batman book is double page spreads and battle scenes. My point is that they could have cut this book down to four issues which makes a nice size trade.

Next up: The Conclusion (I hope). Please, no Volume IV!