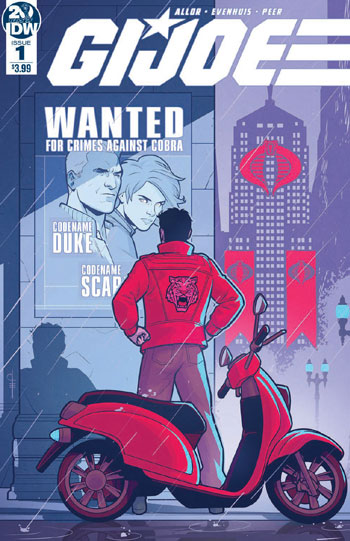 I can’t start off this review without stating the obvious.

Long story short, G.I. Joe was my first love in comics; I have an Arashikage tattoo, I’ve made Larry Hama pose with me too many times with the tattoo, and I’ve been reading every new issue of G.I. Joe that is under the banner of IDW in recent years.

The relaunch started out strong, with even more Hama books in a new continuity, a great run by Fred Van Lente, and there were some other Volumes or Seasons that missed the mark a bit for me.

Among the issues I enjoyed were some one shots from the writer of this issue, Paul Allor.

As one gets with ‘your favorite thing’, when a new edition comes out, you approach skeptical by nature, speculate on merits, and if you have a generous heart and mind, you ‘give it a shot’ at least. Star Wars, Star Trek, Mad Max, whatever it is that floats your boat, you hope the new folks don’t muck it up too badly.

I flipped open a new G.I. Joe #1 trying to guess it’s contents with minimal info, just a guy with a tiger jacket near a scooter staring at a poster of Duke and Scarlett deemed “WANTED” by Cobra (a ruthless terrorist organization determined to rule the world!). The merging of a Quadrophenia GS Scooter and Akira definitely peaked my interest. I like the style Chris Evenhuis uses on this book, it has a ‘look’.

On to the story, which is a new status quo, and one that works in the Joe-verse. What if-!? Cobra won the ‘war’. Sure, it’s a trope used frequently in comics or fiction from Red Dawn, Days of Future Past to The Man in the High Castle among others, but I can concede to this notion. Cobra is in charge and there’s nothing you can do about it!

The Joes exist here in this storyline, and I actually gasped at one point in issue one, because, who is surprised by anything in comics anymore?

Since I’m a Joe fan I won’t spoil it for other Joes out there, but think about how different 2009’s Cobra story from Christos Gage starring Chuckles may have had an influence here.

Scooter kid, who predictably will get the Code Name: Tiger is a regular dude but he wants to stand up to Cobra and get revenge on the losses they have inflicted on him. By inserting himself, unwanted, into a Joe espionage mission he’s brought in to talk to the team.

Good to see some familiar faces here, Scarlett, Roadblock, Stalker and a defeated and broken down General Hawk in full dress. There’s even Major Blood and Battle Android Troopers (B.A.T.S.)

Just like you can’t go home again and get that hit of adrenaline from seeing Star Wars for the first time, I’ll never be able to get as jacked up as I was when I read G.I. Joe #46 at a birthday party in 1986, but maybe some kid out there will have that experience with this book. I’m not sure, based on art style and just this first issue to go by that this book is meant for ME to enjoy, but that’s OK.

I read a lot of comics, and what I can say here is that Allor is telling a meaningful story, with a hook, a last page reveal and some genuinely shocking moments. It is hard to have even one of those elements aligned in a good monthly book in 2019, so I give G.I. Joe #1 my stamp of approval.

It’s not the Hama verse, but I do love these characters, am willing to meet new ones, and watch how this comics experience teacher crafts a story. G.I. Joe is off to a good, clean start, and I’m sure we’ll have some Easter Eggs for old men like me, but if it takes 20 issues to get to grape soda and chocolate covered donuts, I’m fine with it!

Best of luck to the team at IDW and Hasbro for taking their time to have something worth putting out, and I look forward to the next issue!