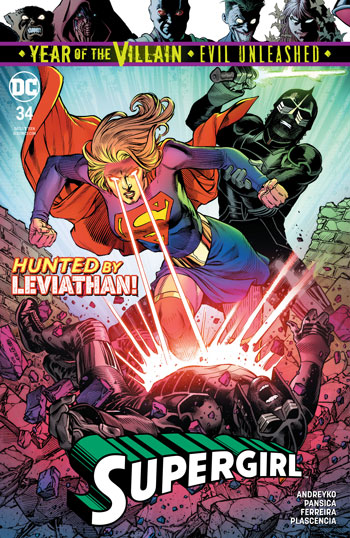 After a hit or miss year on this title, writer Marc Andreyko takes Supergirl back to Earth! This is a good thing as Kara’s outer space adventures were getting a bit long in the tooth. Andreyko resets this title a bit and I was interested to see where he would take us from here.

The issue starts off interestingly enough. Lex Luthor is making his “offer” to Brainiac 1. He wants to power up Brainiac 1 and make sure that he’s up to snuff. This is a nice little lead in to the rest of the issue and gets us off on the right foot.

We then cut over to Supergirl flying through the skies! She’s hanging out with Krypto and she seems to be on the Leviathan case.

Which leads me to one of my problems that I have with the book.

Why can’t Supergirl just have her own adventures rather than always “being behind the scenes” of the Bendis run of book? If you look real closely, that’s exactly what’s going on.

We then get to see the leveled up version of Brainiac and man, is he a scary looking being now. It’s nicely handled, especially in the art by Pansica. His art is improving each issue too in leaps and bounds. It’s really excellent.

Supergirl then follows the clues to the Block. She goes in and asks questions about Leviathan. It’s pretty cool but again, it immediately makes this feel like a second tier book when it doesn’t have to be. It feels like the deleted scenes from the Bendis books.

Supergirl then fights some of Leviathan’s group. It’s a pretty standard fight. Then, one of her old friends appears and seems to be wanting to help her with this case. And that’s where the book ends this time.

It’s not terrible. There’s some good writing and some excellent art. I just feel like this book can do something else than pick up the scraps Bendis sends over. It needs its own identity and once it has that, it’ll be a much stronger book overall.