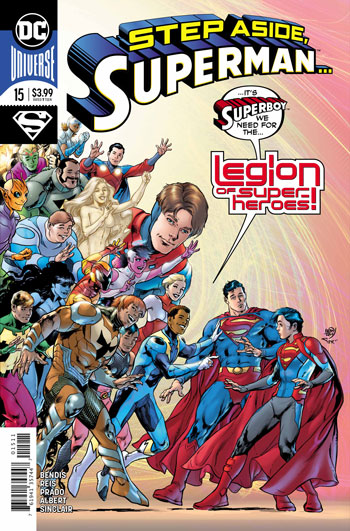 This issue ties into the upcoming Legion of Super-Heroes book that Brian Michael Bendis is writing. I’m honestly a bit bored already.

I have been hoping for a nice take on the Legion for years but unfortunately I don’t think that this is it. It feels rather lazy, actually.

The book starts off with Adam Strange talking to Superman. They stand in front of a captured Rogol Zaar. Let’s hope he remains gone for a long time.

Adam Strange and Superman have a conversation that kind of goes in circles. And then, that’s when we see the Legion of Super-Heroes.

There are so many characters on the page and everything is rushed and a bit hokey. Jon and his dad have a conversation about the Legion.

And that’s when everyone declares this day “Unity Day!”

I’ll be honest, it was so unearned that I started to laugh. And I love the art of Ivan Reis but man, was this just hard. It was hard to read and go on from here. But I made my way to the end. But that felt like I was treading water trying not to drown. It was hard.

The thing is there is so much exposition, that the reader tunes out. I certainly did. There is very little action in this issue. I don’t mind it when a writer decides that they want to focus on the characters.

However this just goes on and on. It was like attending a Bat Mitzvah that never seems to end. The never ending battle in question here is to get the hell away from this!

The last page is the only redeeming part. But even that was hard. Hopefully the next issue picks up with a new storyline and we can leave the Unity Saga behind us. It’s been over a year of this story and it just was a drag. It’s time for a change.