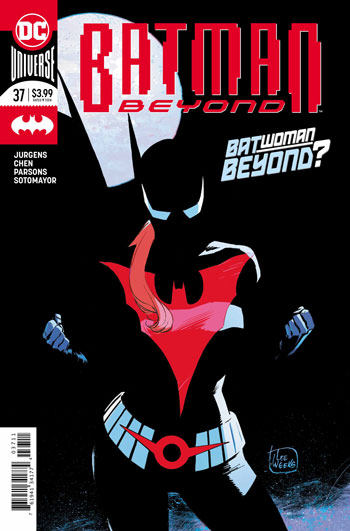 This was a nice issue overall.

Dan Jurgens really is having a nice run of comics here. He has been keeping the action exciting with each and every issue. He has also been handling the human drama very well.

I have been enjoying this book every time it comes out. It’s been a nice read pretty much every issue.

The issue starts off in the Batcave. A Batman suit is found to be missing from it.

Is it because of Terry? Is he back? Is he the one who stole the suit?

This one page sets up the mystery perfectly right from the very beginning!

We then see a robbery outside of a pharmacy. The robbery is foiled by someone in a Batsuit. A Batarang is left at the scene. The man who finds it tries bring it to the police. The whole time, it seems like the entire city is asking just where Batman might be.

Then, there is a firefight between the cops and a couple of villains. It gets pretty intense.

That is, until the Batman swings in from on high and stops the criminals. Or is it the Batman? Or could it just be someone else dressing up like him?

Bruce Wayne and the city are trying to figure out just what just is going on. We then see the last of the Jokerz taking a final stand!

And that is when we get a glimpse of who is in the Batman suit. It is a female. And that is all kinds of awesome.

There is a great cliffhanger at the end of this issue. And there are so many great plots as well. The art by Chen is perfect. I am loving where this is going. There is a mystery at play and I can’t wait to see where this is headed.