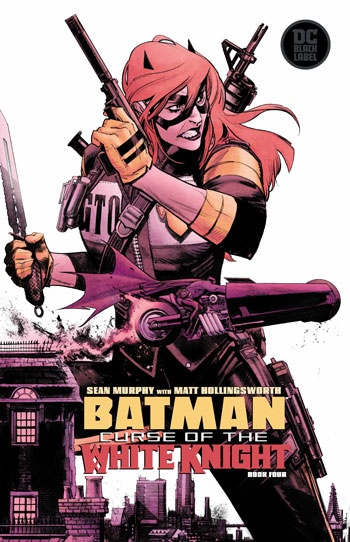 The term “less is more” doesn’t apply to Sean Murphy.

The plethora of moving pieces held within the confines of this issue is a pleasure to watch unfold.

The brutal death of Commissioner Gordon is felt across Gotham City and especially the Bat-Family. Murphy used the pain of loss to drive the narrative forward as Barbara Gordon is left reeling.

Vengeance made her cast aside her principles to hunt the man who killed her father.

This issue is very much Babs’ story as her perspective is augmented by a flashback of a touching father/daughter moment from her younger years. The advice she received that day shaped who she ultimately became as a person.

Meanwhile, Batman is putting on a strong front but is hanging on by a thread.

Murphy tapped into that by allowing the reader to see Batman’s emotional state, which mirrors his grip on crime control. It’s hard for a leader to command respect when most people feel he’s responsible for the current state of Gotham.

Right now, it feels as if Batman should retire if he can extinguish the fiery threat of Azrael. People are more upset with him, then they are afraid of him, which essentially removes the Dark Knight’s greatest weapon. There is just too much collateral damage to come back from to succeed. It’s that sentiment Murphy banked on and has paid dividends thus far.

So much occurred on an emotional and street level, the mystery surrounding the Wayne Family’s past unearthed some new secrets. One person is revealed to have a deeper connection than first anticipated while another came entirely out of left field, and made perfect sense.

Sean Murphy unpacked a lot here. Excellent character development, fantastic visuals, and emphasis on the secrets at play has Batman in a position where he can’t possibly win on his own.

Heck, he might not be able to win at all.