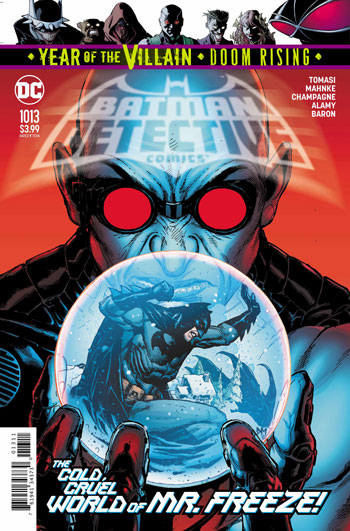 Peter J. Tomasi has been writing one hell of a comic book with this title.

For this storyline featuring Mr. Freeze, he is teamed up with artist Doug Mahnke. It is one hell of a pairing and the creative pair knock it out of the park. This could be a definitive Mr. Freeze story as well. It is seriously that good.

The first few pages have Batman holding a goon with a bloody nose interrogating him.

Things are frantic right from the get go.

Batman is trying to decipher just where Mr. Freeze is and what he wants. It is exciting and it is so well drawn that it gets the blood pumping.

Batman launches after Freeze to try to foil his plans.

We then cut away to the Gotham Pine Barrens. Mr. Freeze is ready to get his wife back. Then, Batman busts onto the scene in a new outfit ready to fight and to stop Mr. Freeze!

The two have a tussle. Mr. Freeze escapes in a vehicle. That is when Batman hops into his vehicle to chase Freeze down. After a hell of a chase,  Freeze escapes. Batman regroups himself and heads back to the Batcave.

The end of the issue has Freeze trying to revive his wife. And you know what? It seems like Freeze may have done the impossible. That leads into a whole bunch of questions.

What is going to happen next? What ramifications will it have? I have no idea. But I  trust that this creative team has it under control. This has really been a great run that keeps getting better and better.