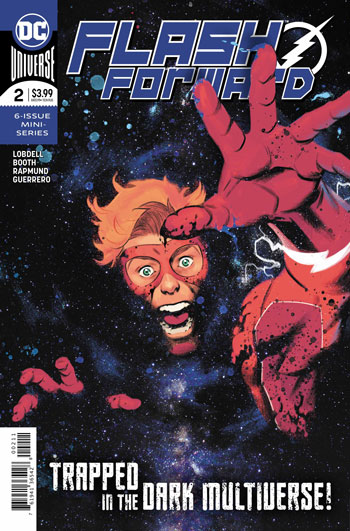 The first issue of this series was a bit tepid for me. This one is a bit better but only slightly.

I love Wally West ,but Lobdell doesn’t quite have a handle on the character. He does an okay job but it does not feel like the Wally West I know and love. And that is a damn shame.

Wally has been sent to a wacky alternate dimension. The opening page has him holding a version of Superman that is President. That Superman is beaten down and laying in Wally’s arms. It isn’t long before this demonic perpetrator comes and starts to attack Wally and President Superman!

It then gets completely wacky from there!

The border between the Multiverse and the Dark Multiverse is starting to come apart.

Wally is fighting for the lives of everyone here! He is joined by strange versions of our heroes! The Justice League appears! Batman appears! It is all handled beautifully by the crazy, adrenaline fueled art of Brett Booth.

It almost gets too nuts. I don’t mind crazy but there is so much going on that I lost focus quick. There isn’t a lot of dramatic weight. Instead, we are given a hugely galactic tale that just tries to one up itself constantly.

Like I said before, Lobdell doesn’t have a handle on the Wally West character. I wanted to know where he is emotionally. But unfortunately, any hopes of that is run over immediately.

And that’s the biggest shame of this thus far.