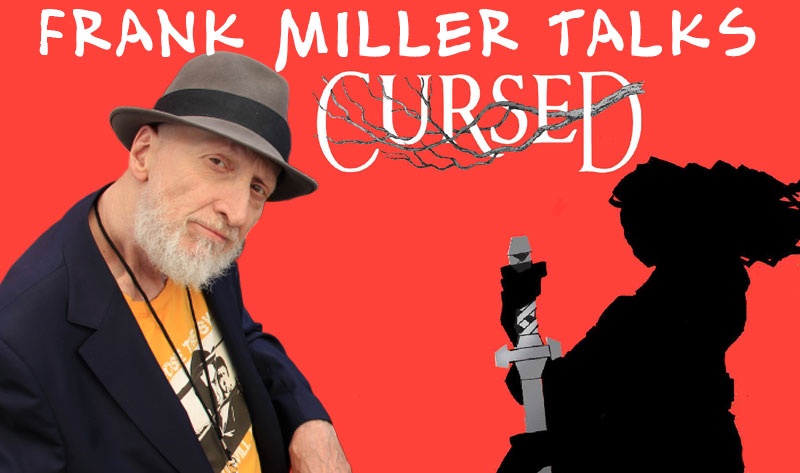 How do you get a young person to read a quality book?

I get to write about pop culture, but luckily, teaching literature to youth is my other job. I have to constantly dream up ways to persuade a young person to walk away from the myriad of their game-ready devices at their disposal and pick up the most reliable medium of communication that has ever existed: a book.

Some days, in all honesty, it has its challenges, but I recently had the great fortune and opportunity to speak to Frank about his latest collaboration with Tom Wheeler that has proven instrumental in yielding some sage advice and wisdom in the pursuit of literacy for the youth of today. If that doesn’t turn some heads, then I don’t know what will! Here’s the first notion:

Give them an exciting story that involves mystery, mayhem magic.

Cursed is a re-examination of the Arthurian myths but from an atypical character’s perspective, namely, not from Arthur, Merlin or any of the other main characters. This time, it’s about Nimue, otherwise known to Arthurian readers as “The Lady of the Lake”, and the guardian of the famed magical blade, Excalibur. But this is a young Nimue, one who is steeped in the lore of her people, the Fey and who is at the beginning of her powers and legend. 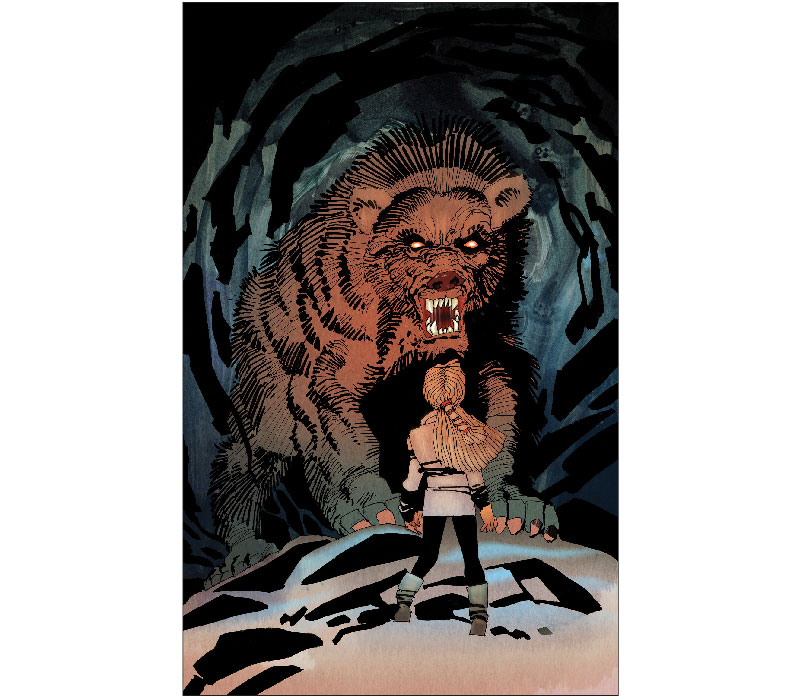 “It’s a study of someone of great power, learning first to come to understand that it exists, and then to learn how to harness it.” Frank tells me as we discuss Nimue further. Nimue is a fledgling figure of sorcery and power in this book and the harbinger of the magic that is to come in this story. As this is her veritable origin story, she’s also a figure of great mystery to any prospective young reader, so her attractiveness is high. Plus, as one of the Fey Folk, the sworn enemy of the Christian Church in this novel, she is a character that inspires great chaos. She is pretty much every young person’s ideal of a counter-culture hero.

Frank has a proven track record in writing successful female protagonists, so his influence is keenly felt in this collaboration with novelist, Tom Wheeler.

That, of course, led to the next trick of enticing the youth to read:

You show them an exciting character they can relate to.

In many ways, Nimue reminded me of the character of Carrie Kelly – the female Robin from Frank’s milestone graphic novel The Dark Knight. She’s a youth with conviction and a strength that belies her age. I asked Frank to comment on the similarity. 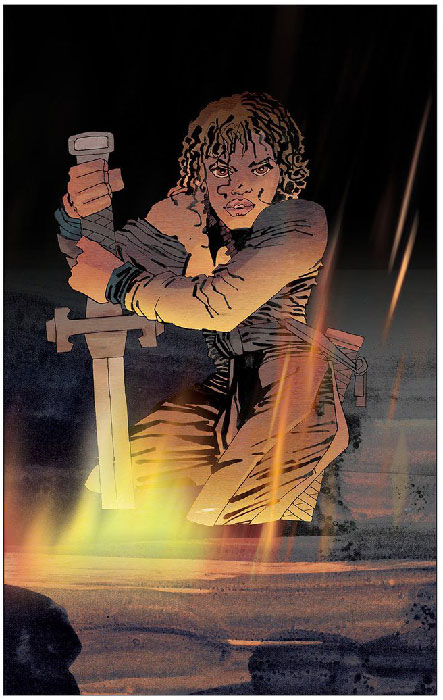 “She is very strong.” He agreed. “But she also has a wide-eyed innocence of coming to understand things. Here are a couple of things: you can’t help but admire her and you can’t help but connect to her. She is a character who could very easily be a victim and you want to stay with her adventures because you come to care about her. But – you also want to admire her.”

It’s a dynamic combination of irresistible attributes that would endear Nimue to any young reader. If you look at contemporary YA fiction, more and more we are seeing the rise of powerful young female lead characters that everyone can admire. It’s a new trend and a refreshing one.

However, Frank has both demonstrated success and an excellent track record in this area with mastery of showcasing strong female characters in his career.

Why should Nimue be any lesser in her appeal to a young generation of readers?

I have to confess that even I was drawn to Nimue’s character in this story.

She was young and headstrong, like so many of the students I teach today. Wheeler has an excellent grasp of what sort of a hero, or in this case, a heroine, teen-agers can look forward to reading about. Nimue not only has strength, but compassion and a sense of protectiveness of her people. She is a crusading altruist, and that’s a character young adults want to read about.

Here’s the next method you use to incentivize the new generation of readers:

It may seem like a cheat, but it’s standard practice for writers and artists to see their creations hit both the small and big screens.  They know the appeal that visualizing their creations have on the general public. It stands to reason the young readers have the same sense of appreciation. However, it’s more than that. Young people generally enjoy a film experience as they are more concerned with the entertainment than the imaginative effort required to envision the work.

However, many educators also utilize this factor to enhance the enjoyment and learning of their students. But, in this case, Netflix has already signed on to producing an original series before the book has even realized sales. I can’t think of a greater degree of faith in the project than that. So, for me, in recommending this book to a younger audience, the fact that it’s going to be a bingeworthy series for them to access as they read is a major factor in getting them to read this book. 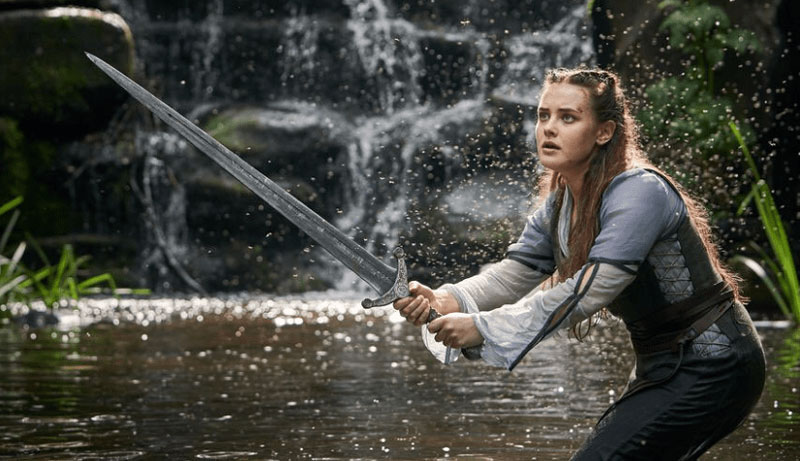 I asked Frank about his involvement in the series.

“I’m there to lend my talents to whoever needs it. I’m involved in every aspect of the show. It’s a big production that needs many hands.”

Frank’s excitement about the series was obvious in our conversation, but it’s also an exciting factor to add when you’re talking this book up to a classroom of potential readers. In fact, Frank even hinted about the quality of the series when he mentioned one of the actors playing Merlin – who is, without a shadow of a doubt, the key figure in the Arthurian Mythos. Well, at least in my opinion.

“I’m a lifelong Merlin fan. I can’t get enough of him. Gustaf Skarsgard is playing him in the show. To say he’s an actor is an understatement. To see the guy in action? Not only is he extremely tall, he brings a sense of fun to the part. So, he’s Merlin on every level.”

High praise; it lends itself well to persuading a classroom of recalcitrant readers to pick up a book and compare the role envisioned in this show to the way it’s described in the novel. In fact, that, in itself, becomes a great inquiry-based question that gets the student thinking of the novel in comparison to the show. How cool is that, in that we get students thinking about two different media versions of the same work?

Finally, the last way that the nature of this book challenges students to read lies in this the way that students are challenged.

Tell them they wouldn’t get it.

Heh … I asked Frank what the students of today might react to the Arthurian legends today, given the nature of the need of students to assert their identities in today’s society. How would a 1000-year old myth relate to them? In my experience, there’s nothing more challenging to a student than to tell the kid that she, or he, wouldn’t get it; you know, that it’s not for them? You’d be surprised how many kids rise to the challenge of that it’s beyond them.

“There is nothing wrong with the Arthurian legends! They have worked on every other group of people that they have ever been presented to. It’s really just up to us to do our job and do it proper service, and it’s capable of surprising an audience with plenty of fresh angles.”

And with that? Yeah, it’s a dead certainty that the Young Adult market will get this book. But, to be frank (no pun intended), it’s not a novel idea for a novel. The best fiction either revolves around something that’s been proven to work (Shakespeare, anyone?) in the past, or that’s completely innovative in that it hasn’t been done before.

In this case, we have Frank Miller and Tom Wheeler telling a story, in a tried and true mythos that has been universally accepted throughout the collective memory of popular fiction.

Yeah. I think a new look at King Arthur and Camelot will work, especially with everything we’ve looked at here. 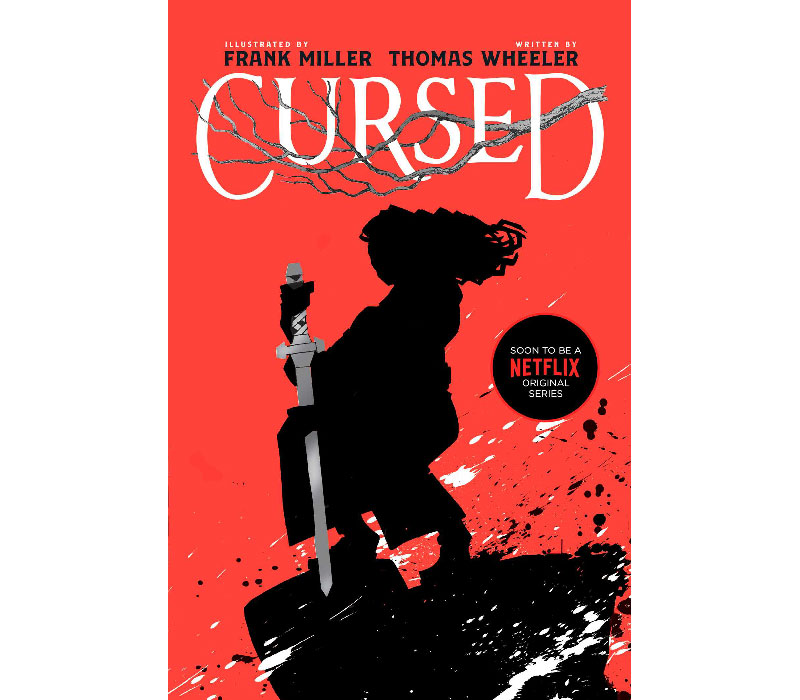 Cursed is out on the shelves now. Do yourself – and your kid a favour, and pick it up. They’ll thank you for it by reading.