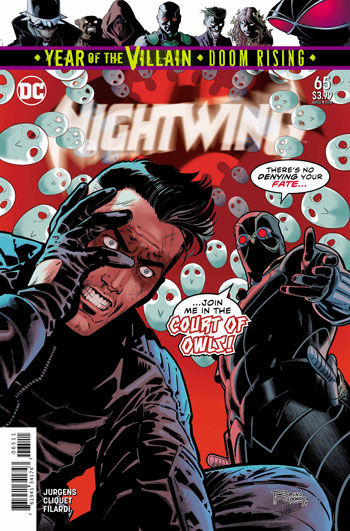 This has been a nice run on Nightwing for Dan Jurgens.

He had a lot of storyline threads kind of thrown at him but he made the whole thing work well. He has created an involving story that more than keeps my interest month in and month out.

The story opens with Ric ready to fight Talon!

It is a beautiful two page spread by Cliquet! The two then tussle. Talon wants Ric to join the Court of the Owls. Ric does not want to. They battle. It is a huge fight. Bea even gets involved. I loved this part of the issue.

Meanwhile, the Nightwing Squad is trying to keep the entire city together! They might have their hands full. A mob has formed and everyone is going a bit crazy! Everything is incredibly tense and I totally loved it!

That is when the sky lights up. It is a sign from Lex Luthor! (It appears in a few books this week most notably Batman #81) It stops the fighting. But what does it mean? Then after that, the fighting resumes!

The ending of the issue then takes a wild twist that I did not see coming. It is a great cliffhanger, and I can’t wait to see what is next. Jurgens and Cliquet have created another fine issue. Next month can’t come soon enough!