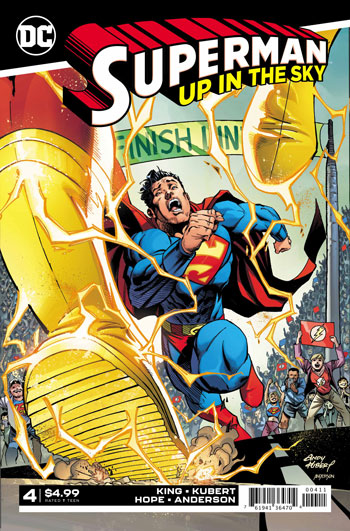 The main plot involving a little girl kidnapped by aliens had started to take a backseat. So much so, that I was losing faith in the series after a strong start. This issue does a decent job of turning things around with some hiccups along the way.

The first story recaps a race between Superman and The Flash.

As the narration unfolds, the vernacular quickly identifies the story is told from the kidnapped girl’s perspective.

While the illustrations gorgeously depict our heroes vying for the finish line, the outcome is not the big takeaway here. The girl is scared, lonely, but she has hope.

Her optimism lies in seeing with her own eyes how Superman didn’t quit when things got tough.

Tom King explains the girl’s fandom of the Man of Steel by using the race as a vehicle to keep her hope alive. It’s a well-done piece of business that brings the victim back to the forefront while learning a little more about her in the process. All we knew about her was that Superman is her favorite superhero. Now, we know why. The artwork on the final page is the emotional epicenter of the book, which brilliantly augmented the story it served.

The second story deals with Superman’s pursuit of the little girl that caused his human and Kryptonian sides to collide.

One side believes finding the little girl is a fool’s errand while the other side thinks the opposite. Both sides of the argument have merit; however, we’ve been here before. It‘s a gentle reminder of the mission’s philosophical anchor. Still, how many conveniently timed blockades are going to prevent Superman from saving the girl. It feels as Tom King is killing time until the series finale, and we still don’t know why the girl was kidnapped in the first place.

Up In The Sky is a 50/50 offering this time around. One tale cleverly brings the focus back to the overarching story while the other is narratively running in place.