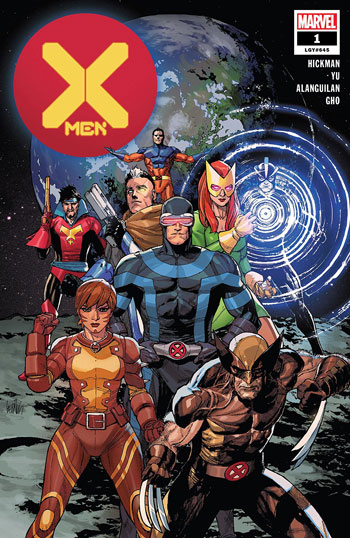 “While you were sleeping, the world changed.”

Those words from Professor X to humankind opened the first issue of Jonathan Hickman’s House of X, but they may as well have been aimed at readers who slept on the X-Men runs before it and discounted the franchise.

The X-Men have returned, with an actual vengeance and righteousness that hasn’t been missing so much as it’s rarely been there.

If you missed House of X (and its essential companion series, Powers of X; the two are really one story with multiple angles), then you missed A LOT.

Moira McTaggart is actually a mutant with a sort of power of rebirth: upon death, she returns to the very beginning of her life with all of her accumulated memories intact. When her efforts over multiple lifetimes lead to repeated dead-ends for mutantkind, she decides to do something totally unexpected: radicalizing a young Charles Xavier by allowing him to read her mind, then convincing Magneto alongside him to work together to plot an ambitious course for mutantdom.

That course is Krakoa.

The living island from Giant-Size X-Men #1 becomes the site of Xavier, Moira, and Magneto’s new nation-state built solely for mutants. Through the development of miracle drugs, they barter with the world for their sovereignty, while a coalition of scientists from across the intelligence world (and even HYDRA and AIM) form a new coalition called Orchis in the name of saving humanity from extinction.

We could be here all day if I went even further, but suffice it to say, House of X and Powers of X were a massive shift for the X-Men: no longer are they fighting for a world that fears and hates them. Instead, they are the “heroes of mutantdom” standing between the sacred land of Krakoa and the human world.

If you didn’t read House of X and Powers of X, then you should do that before you read X-Men #1, because it’s a continuation rather than a jumping-on point.

Plot-wise, there isn’t very much to it. The book begins with Cyclops and his team storming the last known Orchis stronghold and liberating a number of mutant children, while the remaining Orchis force regroup elsewhere following the losses they suffered to the mutants.

What separates this book from its predecessor is its slower pace and deeper focus on characters, on both sides.

On one hand, you have Cyclops and not only his team, but also his family. There’s a sequence where the Summers extended family has dinner in Scott’s residence on the moon. It’s not just Scott, Jean and Havok, but also Corsair and the Starjammers, Vulcan, and Wolverine, who lives with the Summers family. A lot of time is also given to Orchis characters, who discuss their plans and fears should the mutants surpass them.

What Hickman has accomplished more than anything else is a sense of impossibly high stakes for everyone involved. Even though mutantdom is ascendant on Krakoa, it’s a desperate time as they scramble furiously to ensure their survival. Magneto fights alongside the X-Men in their assault on Orchis, while Orchis is literally a “team of rivals” fighting what they see as a desperate battle for their own lives.

Joining Hickman for this series is Leinil Francis Yu, who is typically great at action sequences but also succeeds in conveying smaller, more grounded moments. Yu is a good fit for a book that thrives on character interactions.

The book would be near-perfect is Hickman’s dialogue wasn’t always so broad and hokey.

The opening expository dialogue during the Orchis raid feels interchangeable; anyone could be saying, “Man should know when he’s beaten,” and if you can’t tell whether Magneto or Storm said that (it was Storm, by the way), then there’s definitely a problem. While a lot of the dialogue in HoX/PoX sounded too broad and ideological, it fit the series’ almost documentary-like pace and structure and set the scene for what followed.

Here, much of it feels very uneven.

Still, there’s a lot to like about X-Men #1. It continues the new X-Men mythos, gives us a little bit of mystery regarding the new characters, and features some humor in the form of a brief Wolverine/Vulcan exhchange. Dawn of X is a bold new direction for Marvel’s militant mutants, and X-Men #1 is a good first step.