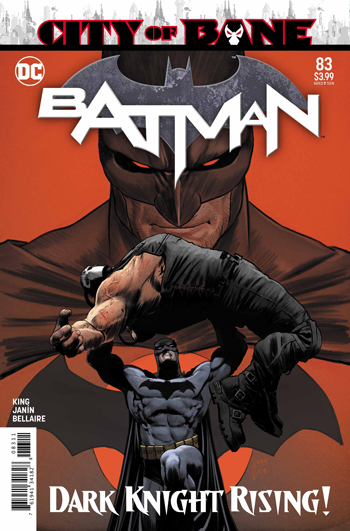 The City of Bane storyline is completely nuts! The whole thing is coming towards it’s conclusion. Tom King has done an absolutely first rate job on this comic and it shows on every single page.

This has been a great run thus far! And this issue may in fact be the most emotional of King’s entire run.

The opening pages have to do with Batman dealing with the death of Alfred.

Batman wakes up at the dining room table to see Alfred dead across from him. It is such a heartbreaking and sad scene. It is also extremely well handled by the creative team. I was very impressed by it all.

Bruce looks up at picture.

There is a message that says “You’re Not Batman” scrawled on the wall over a picture.

Bruce beats the hell out of the house. This goes on for a little while. Then, there is an explosion. That is when Catwoman enters and tells Batman: “He says you’re ready.”

That is when Bruce goes past his Bat-family. He comes up against the Thomas Wayne Batman from the Flashpoint universe. They square off, ready to fight. It looks like that there is going to be a big fight next issue. And that is where this intense issue leaves off.

It feels a bit short, especially because we are near the end of the story. Not a lot happens and it moves quickly. Still, it is a pretty intense issue.

The art is pretty great here. Janin does an amazing job of making this whole thing work. Even though it is short, it does pack an emotional wallop. And that is a really great thing indeed.