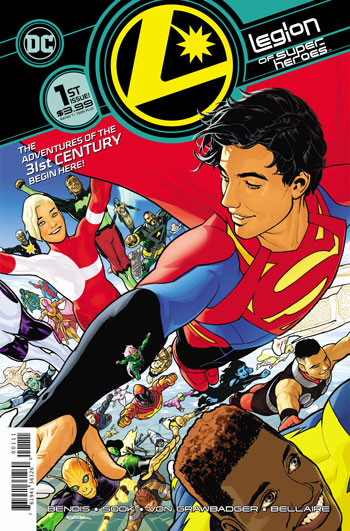 I loved the cover by Ryan Sook on this first issue. I have to say, it has been quite a long time since I have seen a cover that has drawn me in this much. It is a good thing too that the issue is drawn by him as well.

This is the first issue of an ambitious series.

Well, it is actually not too bad.

There is a nice and tense opening scene that has a couple of members from the Legion on a mission.

They are infiltrating the domain of Mordru. They are after a mysterious object that he has. And they aren’t leaving until they get it!

A nicely drawn fight happens. It is beautifully choreographed by artist Ryan Sook. The members of the Legion succeed in their goals! That is when we find out what they were after. It is Aquaman’s Trident! It was a fun moment and got the book off to a nice start!

We then see the Legion introducing the newly arrived Jon Kent to their future world. Jon quickly discovers that he is in the Metropolis of the future! It is a beautifully joyous scene. I was having a good time with this!

Then, an evil threat makes itself known. By the end of the Legion are under siege! It all leads to a cliffhanger that really intrigued me. But I did have one major issue that is pretty hard to ignore.

Bendis writes a very compressed comic. Not a lot happens for my money. It feels like you just about open the book and then you find yourself at the end. Now, it is pretty decent overall. But it feels more like a snack and not a full meal. The best part is Ryan Sook’s artwork. He makes the snack feel much more filling than it really is.