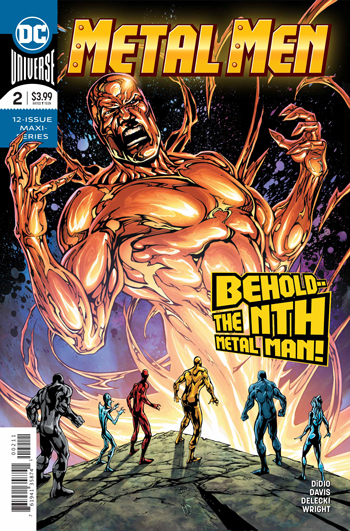 Well, this issue is certainly a little better than the last. It would almost have to be.

This one at least had some action!

It still doesn’t feel like the Metal Men that I remember, however.

It feels a bit like the creative team is trying too hard and that the book takes itself a little too seriously. It also doesn’t have any characters that I could identify with.

While there is action in this issue, it doesn’t happen for a little bit. And it is as dull as can be for awhile.

Apparently, the Nth Metal Man has arrived from the Dark Multiverse. And where does he arrive at?

This thing wants to stay in our world and will stop at nothing to make sure that happens. Like most of the story elements in this comic, it is pretty cliche.

And guess what? It is up to the Metal Men to stop them! They go for it! There is finally a little bit of action!

Can the Metal Men save the Earth? Maybe. But nothing is going to save them from Dan DiDio’s horrible dialogue.

I am not exaggerating either. There are some real groaners in this comic. When one of the Metal Men turns into a giant screw and says “Screw This!” I had just about had it.

But sadly, the book just keeps on going and going.

The rest of the issue after the fight is just more talking. And talking heads. They need to liven up this comic a lot more than this.

Right now, it is just a boring waste of potential all around.