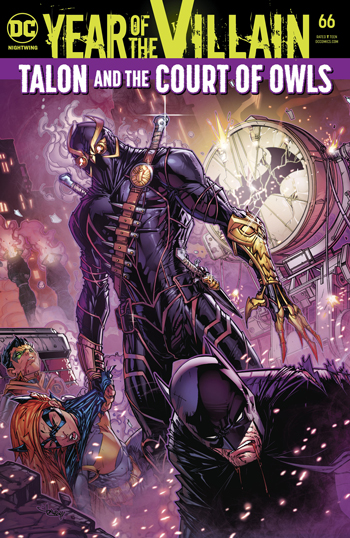 Man, the last few issues have been damn exciting on this.

I am still not enjoying the “Ric Grayson” personality that Nightwing has adopted but besides that the book has been pretty solid.

This issue is ridiculously damn good and there is plenty of great action in it!

The opening of this book has the Nightwing Squad performing a big rescue. The scene is harrowing and very exciting. There is a moment where it looks like Hutch may not make it. He escapes, but it is a very tense scene.

The creative team prove that they know how to keep the reader on their toes.

The Nightwing Squad take notice of the Lex Luthor symbol in the sky.

It is very ominous. From there, we head over to see the Court of The Owls. They have a scene to give us a little backstory. And then we head on back to the main event.

That’s right! It is Talon versus Ric Grayson!

Talon is showing Ric who he used to be. We get a lot of flashbacks. Some of it is a bit repetitive, especially for those who know Nightwing’s history. There is not a lot of things really resolved in this issue. But it feels like it is all coming to a head soon.

By the end of the issue, the Court of the Owls is making their move against the Nightwing Squad. It is a pretty intense ending, and it looks like some bad stuff is about to go down.
I

really like artist Ronan Cliquet. His work is perfect for this book. He has a nice quality and makes the whole book grounded. I hope he sticks around for a long time to come.